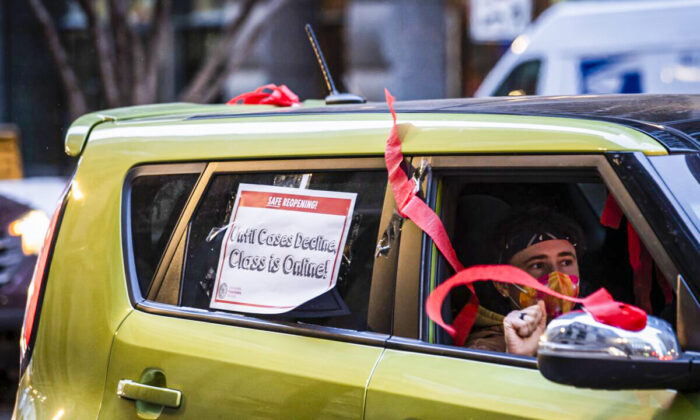 Members of the Chicago Teachers Union and supporters stage a car caravan protest outside City Hall in the Loop in Chicago, Ill., on Jan. 5, 2022. (Ashlee Rezin /Chicago Sun-Times via AP)
Illinois

Chicago officials canceled classes citywide on Jan. 10 as they failed to reach a new agreement with the Chicago Teachers Union (CTU).

Union members voted last week to abruptly shift to virtual teaching, a move rejected by Chicago Public Schools (CPS) and Chicago Mayor Lori Lightfoot. City officials instead canceled classes and have been seeking to convince teachers to get back in the classroom.

Thus far, they haven’t been successful, leading to the fourth day of canceled classes.

“Although we have been negotiating hard throughout the day, there has not been sufficient progress for us to predict a return to class tomorrow,” Pedro Martinez, CPS chief executive, told parents in a letter on Jan. 9. “We appreciate your patience and will continue providing you with updates as soon as they become available.”

Martinez and Lightfoot, a Democrat, say CTU’s actions amount to an illegal work stoppage because the union can’t, under state law and the current collective bargaining agreement, unilaterally decide to not teach in person.

“What the Chicago Teachers Union did was an illegal walk-out. They abandoned their posts and they abandoned kids and their families,” Lightfoot said on NBC’s “Meet the Press.”

The union stated that the move was necessary because of the spike in COVID-19 cases and because there allegedly aren’t sufficient safety measures in place at schools.

“The Chicago Teachers Union has been at the bargaining table for the past six months—before the discovery and spread of the Omicron variant—with CPS and Mayor Lightfoot asking for collaboration and well-thought-out mitigation strategies to keep students, families and educators safe. Regrettably, these requests have fallen upon deaf ears, resulting in attacks on teachers and a five-day lockout that has disrupted the lives of hundreds of thousands of students and families,” CTU said in a Jan. 10 statement.

“The Union wants to reassure the parents and guardians of Chicago that we will remain at the bargaining table until we reach an agreement that will return us all to in-person learning safely and equitably.”

Over the weekend, CTU floated the idea of holding classes virtually through mid-January, a proposal that was quickly rejected by Lightfoot.

The union is facing an unfair labor practices complaint from the city and a lawsuit from a group of parents, who also allege that the union is conducting an illegal strike.

“Parents are outraged. And they are making their outrage known to the teachers union,” Lightfoot said.

Union members planned to go to various neighborhoods on Jan. 10 to sign up students for COVID-19 testing before launching “car caravans” that would converge on City Hall as part of their effort to pressure the city into acquiescing to their demands.