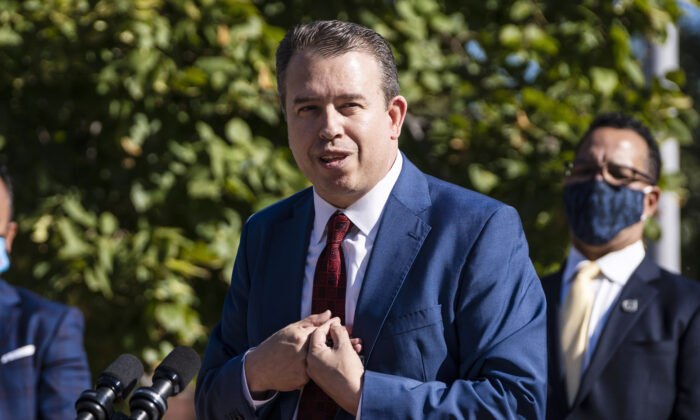 Chicago school officials canceled classes Wednesday following a teachers union vote to shift back to virtual learning due to a rise in COVID-19 cases.

The Chicago Teachers Union (CTU) voted 73 percent in favor of a resolution that called for a return to learning outside classrooms.

“To be clear: Educators of this city want to be in buildings with their students. We believe that classrooms are where our children should be. But as the results tonight show, Mayor Lightfoot and her CPS team have yet to provide safety for the overwhelming majority of schools,” the union said in a statement.

Chicago is the third-largest school district in the country.

Mayor Lori Lightfoot, a Democrat, and President Joe Biden’s administration have been pushing for schools to remain open. Data from 2020 indicate students suffered enormous learning loss and other negative effects after schools shut down and forced children to learn from home.

“There is no basis in the data, the science, or common sense for us to shut an entire system down when we can surgically do this at a school level,” Lightfoot told reporters late Tuesday.

“The worst thing we can do is to shut the entire system down,” she added. “What we need to be focused on is working together. What I’d love to see CTU do is not force an illegal work stoppage. What I’d love to see them do is work hand-in-glove with us to get kids and their families vaccinated.”

She vowed that teachers who did not show up to work on Wednesday would not be paid.

Officials said before the vote was announced that if teachers approved the move, classes would be canceled along with other school activities. But students who were dropped off would be taken care of, Chicago Public Schools CEO Pedro Martinez added.

Martinez had asked the union to push back the vote so negotiations on a new safety plan could continue, but the union rejected the request.

“Despite six months of active, good-faith discussions with the CTU, despite the fact that more than 90 percent of our staff is vaccinated, despite proven and implemented COVID-19 safety measures, and despite little evidence of in-school transmission, our teachers are not willing to report to work,” CPS said in a statement after the vote. “We are deeply concerned about this decision but even more concerned about its impact on the health, safety, and well-being of our students and families.”