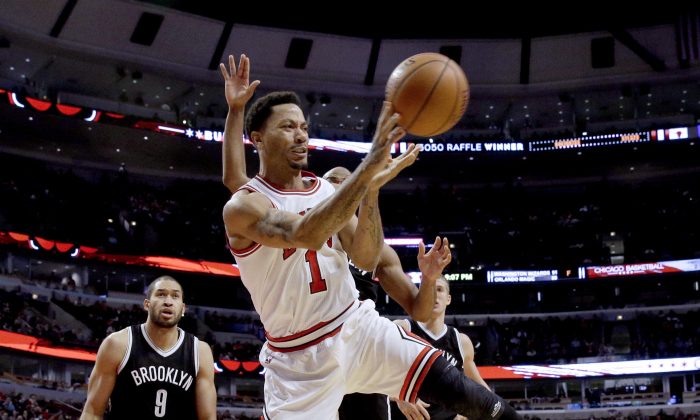 Chicago Bulls guard Derrick Rose (1) passes the ball during the second half of an NBA basketball game against the Brooklyn Nets in Chicago on Wednesday, Dec. 10, 2014. The Bulls won 105-80. (AP Photo/Nam Y. Huh)
NBA

The Chicago Bulls beat the Trail Blazers Friday, and they’ll face the Miami Heat on Sunday. Here’s some of the latest updates.

President Obama, who is a lifelong Bulls fan, says he thinks they can beat the Cleveland Cavaliers in the Eastern Conference playoffs.

“I tell you, the Cavs are starting to jell. But, I just like [Tom] Thibodeau as a coach,” Obama said, per ESPN. “The guy’s tough; they play hard. [Joakim] Noah is a fighter. If [Derrick] Rose, even if he doesn’t come back to MVP levels, if he’s playing at an All-Star level? I think the Bulls can beat the Cavs this year.

He added: “You remember what happened to Miami when LeBron went down there the first time? There’s something to be said for team chemistry. And you look at San Antonio and how they’ve performed, part of that is just [Gregg] Popovich, [Tim] Duncan, [Tony] Parker, [Manu] Ginobili. They know each other, the system and they trust it. The people are selfless. It takes time to develop that kind of chemistry.”

Thibodeau has insisted that Derrick Rose would eventually return to playing the way he was before knee injuries wrecked his previous two seasons.

On Friday, Rose looked like he is going to prove his coach right.

Rose scored a season-high 31 points, and the Bulls overcame big nights from Portland’s two All-Stars to beat the Trail Blazers 115-106.

Rose went past his previous high of 24 points and scored over 30 for the first time since March 12, 2012. He was 14 of 24 from the floor for the Bulls, who have won three of four and improved to 4-5 at the United Center.

For Rose, it was his second consecutive encouraging performance after scoring 23 during Chicago’s win over Brooklyn on Wednesday. And like that game, Rose’s aggression level resembled where it was before his injuries.

“Every game I’m getting more and more comfortable with it,” Rose said.

Joakim Noah might be forced to sit again on Sunday against the Miami Heat.

He’s sat for two games already with a sprained ankle.

Thibodeau said he was a “‘little bit better” on Friday, adding that it’s unclear what how he’ll hold up on Sunday.

“The rehab has taken a long time and he’s really worked at it,” he added, according to Fox Sports.