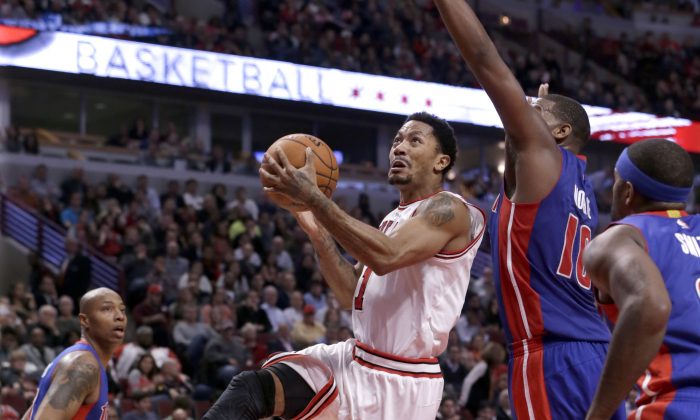 The Chicago Bulls dropped a tough game on Saturday and are looking to build some new momentum on a seven-game road trip that starts on Monday.

Derrick Rose sat out Saturday’s loss to the Indiana Pacers after straining his left hamstring Thursday in the Bulls’ 100-93 victory over the Toronto Raptors. He is day to day and missed four games because of sprained ankles.

“To try to speculate where he’ll be tomorrow, I don’t know,” coach Tom Thibodeau said.

“I’m hopeful if he improves the way he did today, that’ll be a really positive thing, so that’s what we’re hoping for.”

Bulls reporter Sam Smith said that Rose should be back either Monday or Tuesday.

Rose said that the injury is minor.

After the Raptors game, Rose spoke to reporters.

“I guess it’s cramps in my hamstrings,” Rose said, reported ESPN. “But I think it’s minor, and they decided to pull me out.”

He initially thought he could play on Saturday but that didn’t happen.

The injury came after some of Rose’s comments regarding his injuries this year came under heavy criticism. Rose said that he looked toward the future after basketball and that he doesn’t want to be sore going into business meetings or similar activities.

Joakim Noah took the opportunity after that game to deliver an impassioned defense of Rose.

“We’re a group that’s gone through a lot. Just looking at [the situation] as a teammate is just frustrating because I feel like sometimes he’s portrayed as something that he’s not. You don’t come back from the injuries that he’s coming back from without an unbelievable commitment,” Noah said.

“I see it every day. I think we’re all in this together. This is not a one-man team. But at the end of the day, we need him; we need him, and I don’t want to see him down. I know sometimes it’s frustrating, you’ve got injuries, you’ve got tweaks. Every time something happens to him, people act like it’s the end of the world, and that’s [expletive] so lame to me. Relax.

“He’s coming back from two crazy surgeries, obviously we’re being conservative with him, and when things aren’t going right, he’s got to listen to his body more than anybody. So everybody needs to chill the [expletive] out. I’m sorry for cursing but I’m really passionate. I don’t like to see him down and he doesn’t say that he’s down, but I just don’t like it when people portray him and judge him because it’s not fair to him. It’s not.

CHICAGO—The Indiana Pacers were without six players and coming off a 21-point loss.

Coach Frank Vogel felt he still had enough to win, and that’s what the Pacers did.

Chris Copeland added 13 points for the Pacers, who had lost seven of nine and fell 108-87 to the Nuggets on Friday after trailing by as much as 33.

“We got plenty of guys in uniform. Let’s focus on the strengths we have with this group, try to win the next game, weather the storm,” Vogel said about his team’s focus.

The Pacers (4-7) earned another impressive win after beating Miami 81-75 on Wednesday.

“It’s going to be somebody different every night,” Pacers center Roy Hibbert said. “We’re not a team that has someone who scores 20 every night.

“We’re trying to hold it down until everybody gets back.”

Jimmy Butler had a career-high 32 points for the Bulls, who played without the injured Derrick Rose and had won six of seven.

The Pacers shot 7 for 18 from beyond the arc and 48 percent overall. The Bulls shot just 4 for 17 from 3-point range and 42 percent from the field.

The Pacers also outrebounded the Bulls 46-34. Hill grabbed 12 rebounds and Scola had 11.

“It’s a tough-minded group,” Vogel said. “We’re just trying to play to our strength, which is our size up front, even with (David) West out.”

“We got beat in every aspect of the game,” Bulls coach Tom Thibodeau said. “We’ve got to figure out how to play better here. We just played a low-energy game.”

Butler pulled the Bulls within two on a breakaway dunk late in the third, but Copeland hit a 3 and Price completed a three-point play early in the fourth for a 75-65 lead.

The Pacers led 46-42 at halftime after shooting 50 percent to the Bulls’ 44 percent. Scola led the Pacers with 12 points on 6-of-7 shooting after entering the game averaging seven points.

Pau Gasol finished with 12 points and six rebounds for the Bulls after averaging 19.3 and 11.1. TheBulls ended their streak of having at least five players score in double figures in all their games. Kirk Hinrich scored 15.

The Pacers were 29th in the league in scoring at 91.2 points per game entering Saturday.

“When the guys are back, we’re going to have a really strong team,” Scola said.

Butler scored at least 20 points for the fifth time this season. He is the first Bulls player to score 30 or more since Luol Deng had 37 on Dec. 2, 2013, against New Orleans.