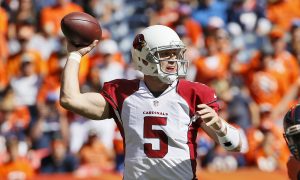 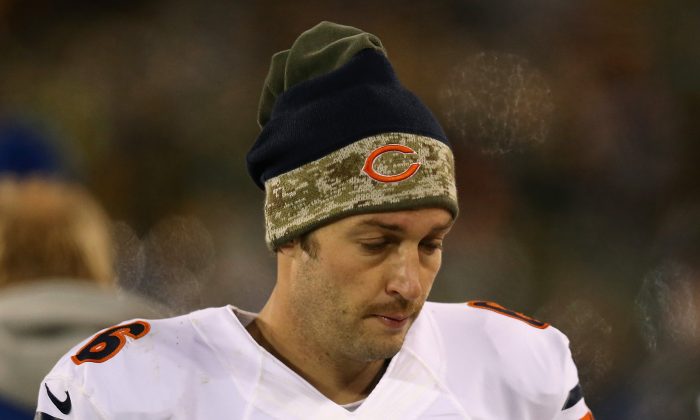 Quarterback Jay Cutler #6 of the Chicago Bears stands on the sidelines in the fourth quarter as the Green Bay Packers take the game 55 to 14 at Lambeau Field on November 9, 2014 in Green Bay, Wisconsin. (Photo by Jonathan Daniel/Getty Images)
NFL

The Chicago Bears fell to 3-6 on the season after being shellacked 55-14 Sunday night in Green Bay. The game was pretty much over early in the second quarter. Packers QB Aaron Rodgers sliced and diced Chicago’s defense to the tune of 6 TDs and 315 yards passing.

Bears fans and watchers are understandably furious. “The Bears are Finished,” claims the Chicago Sun-Times. “Why wasn’t Marc Trestman fired at halftime?” asks the Chicago Tribune.

What will be the fates of QB Jay Cutler, head coach Marc Trestman, and injured WR Brandon Marshall? Read on to find out.

“The way we played, no one really thinks we’re a good team,” Cutler said, according to the Chicago Tribune. Nobody disagrees with you there, Jay.

Already, the blame game against Cutler across the blogosphere is in full force.

Cutler is “the new Jeff George,” writes Randy Inman of Sportsblog.com. If you don’t know who Jeff George is, that’s not a compliment.

Cutler’s fan base has, if it hasn’t already, all but vanished. So much so that Bears fans are publicly burning his jersey. (H/T Deadspin)

Watch as this Bears fan proclaims himself to be “the last Jay Cutler fan in Chicago” and sets his Jay Cutler jersey ablaze.

Trestman: Losses not the coaches’ fault

Bears head coach Marc Trestman has been the subject of immense scrutiny, and the hot seat he’s on is up in flames after Sunday’s brutal loss to the division rival Packers.

While he said that he was one who was overall responsible for the Bears’ performance, Trestman seemed to exonerate himself and the coaches in post-game interviews, pinning the majority of the blame on the players not executing.

“I was confounded to see the type of play we had tonight. Again, our coaches did an outstanding job of preparing our guys this week. And our guys did a tremendous job of preparing,” Trestman said, according to the Chicago Tribune. “But none of it, none of it translated to the game tonight.”

After consecutive (historic) blowouts in which the Bears gave up 50+ points, fans will be wondering if and when Trestman will be fired.

Bears are second team in NFL history to allow at least 50 points in consecutive games, joining 1923 Rochester Jeffersons (who?), per Elias.

Someone even took to Wikipedia to express his or her disapproval of head coach Marc Trestman:

Is Marc Trestman responsible for the Bears’ tumble into last place in the NFC North this season? While the offense has been tolerable, the defense has been down-right bad under Trestman.

In their last dozen games, the Bears defense has resembled a leaky sieve.

It looks like the Fire Marc Trestman camp is going to need a bigger bandwagon – a much bigger one.

UPDATE: Trestman confirmed Monday afternoon that there will be NO coaching changes at the moment and that he thinks the Bears have “excellent coaches,” according to NFL.com. Uh, OK, Marc.

After tweaking his ankle Sunday, causing him to leave the game in the fourth quarter, Bears wideout Brandon Marshall said he would be good to go next Sunday at home against the Vikings.

#Bears WR Brandon Marshall said his ankle will be sore but that he will play next Sunday.

Marshall was one of the few bright spots of the game for the Bears, scoring the game’s lone offensive touchdown for the Bears with a 45-yard touchdown pass in the third quarter.

He had 8 receptions for 112 yards before his injury. He leads the team with 6 receiving touchdowns on the season.

After the game, Marshall said that winning and losing didn’t come down to planning or having the better players. It’s about the mindset, he said.

“Confidence is everything,” Marshall said, according to ProFootballTalk. “When you lose confidence as a player or as a team, you have no chance. Even the great teams, the great players go through seasons, whether that is a day, a week or an actual season, where it is a struggle. Right now, we are in that struggle and if you lose your confidence, there is nothing you can do.”

It’s safe to say that confidence in the Bears clubhouse just might be at an all-season low right now.