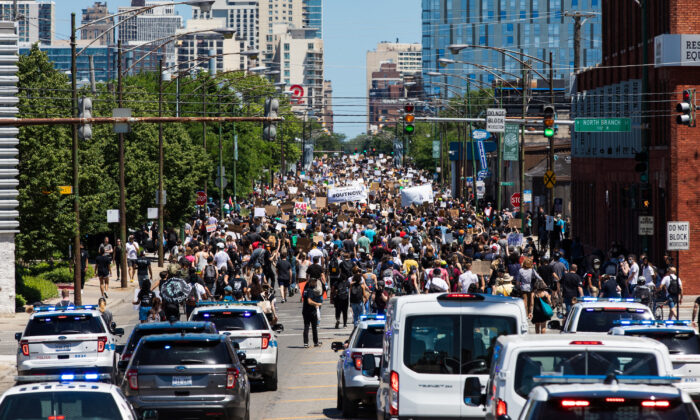 Chicago aldermen grilled Mayor Lori Lightfoot on her response to riots rocking the city nearly a week after the death of George Floyd while in the custody of police, according to a recently-obtained recording of a conference call detailing the angst and sorrow of officials desperate to keep their city from unraveling.

“What are we going to have left in our community?” alderman Michelle Harris (8th Ward) asked rhetorically, according to a tape obtained by WTTW News of a conference call among Chicago’s 50 aldermen and the mayor.

“Nothing,” she continued.“I feel like I am at ground zero—my major business district is shattered.”

In the audio recording of the call, which took place on May 31 but was only recently published, some aldermen are heard breaking down while others voiced outrage and demanded action from Lightfoot, who described rioters as “[expletive] lawless.”

“I don’t know about you, but I haven’t seen [expletive] like this before, not in Chicago,” the mayor said, adding that the unrest, which included widespread vandalism and smash-and-grab theft, was “all over the city.”

According to CBS Chicago, on the day of the call, there was widespread damage to businesses and property, as well as 699 arrests, 132 officers injured, 48 shootings, and 17 homicides.

Lightfoot defended her response to the rioting, however, saying, “We’ve been working our [expletive] off.”

Alderman Susan Sadlowski-Garza could be heard breaking down in tears as she spoke of how her ward had descended into chaos.

“They are shooting at the police,” she said of the rioters and described a scene where some 40 people broke into a marijuana dispensary, adding, “I’m scared.”

Ald. Raymond Lopez (15th Ward) complained his South Side ward had become “a virtual war zone” where gang members were walking around with AK-47’s and threatening to shoot black people.

Emma Mitts (37th Ward) said her West Side ward was like “the wild, wild west.”

Lopez demanded Lightfoot put in place a plan to stabilize Chicago neighborhoods for five days, before the discussion between the two descended into a shouting match and exchange of insults.

The Chicago City Council’s Black Caucus criticized Lightfoot’s decision to use the Illinois National Guard to block off the Loop and the central business district starting Sunday morning, saying it made businesses on the South and West sides an “easy target” for looters.

On the call, Lightfood rejected claims that she protected downtown at the expense of the West and South sides.

But on June 8, a week after the riots rumbled through the city, Ald. Anthony Beale (9th) told CBS Chicago that he expects critics of Lightfoot’s response to the unrest to grow louder.

“People are still furious,” said Beale, adding that his Far South Side ward, which was hit particularly hard, did not receive the protection it sought.

“We were totally dismissed,” Beale said.