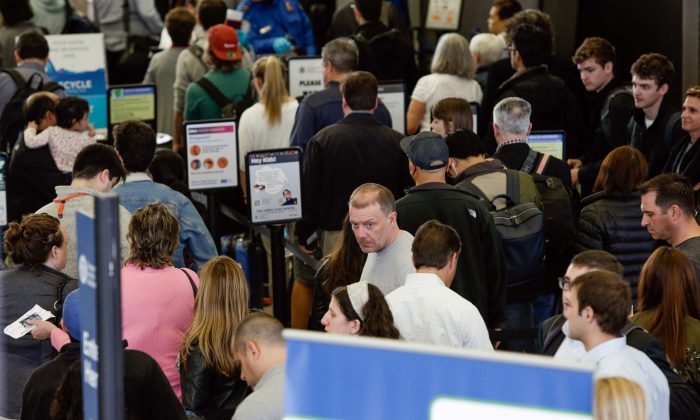 A long line of travelers wait for the TSA security check point at O'Hare International airport, May 16, 2016, in Chicago. Already faced with lines that snake through terminals out to the curb, fliers are bracing for long waits at security in the busy months of July and August. Some major airports are currently seeing wait times exceeding 90 minutes at peak hours. (AP Photo/Teresa Crawford)
Aviation News

Chicago airports have extended their recommended pre-flight time to 3 hours due to security check delays.

These May 17 tweets come just 2 days after 450 American Airlines passengers at O’Hare missed their flights due to security lines reaching 2-hour-plus wait times.

Dozens were stranded overnight in O’Hare’s Terminal 3 because there were unable to secure spots on later flights out of the airport.

My bed for the night, thanks to 2+ hours in line for security & not able to get on 3 flights. @AskTSA #iHateTheWait pic.twitter.com/X796SHM4aQ

Since January, the TSA’s new training program has graduated 352 new officers. There are currently 42,000 officers on the job, which is down from 2013’s 47,000 officers, according to the TSA employee’s union—the American Federation of Government Employees (AFGE).

The AFGE also notes that the volume of passengers has risen 15 percent, from 643 million to 740 million since 2013.

“Congress has starved TSA of the resources it needs to meet growing demands at our nation’s airports,” remarked Cox.

“Shamefully,” continued Cox, “it has even diverted some of the money passengers pay in security fees, shifting those funds from TSA to pay down the federal budget deficit.”

In a May 12 letter to Congress, AFGE union leaders call for the hiring of 6,000 full-time TSA officers, which should resolve delays.