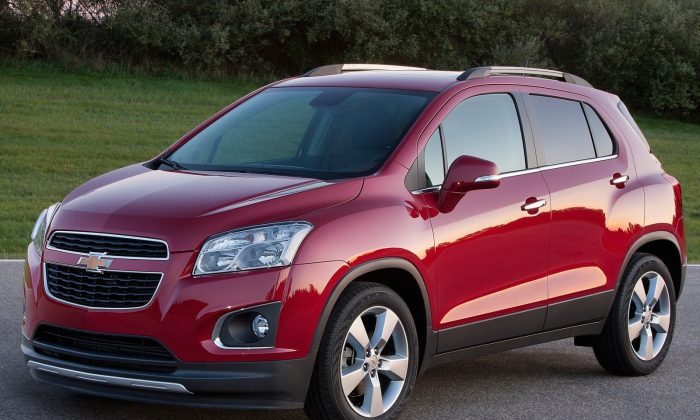 Compact crossovers like the Buick Encore, Nissan Juke, and Mini Countryman have been popular enough to encourage serious competition that will come from the Honda HR-V, Jeep Renegade, Mercedes GLA, and Audi Q3 among others. In fact, given their affordable pricing and excellent fuel economy, the segment is expected to grow rapidly. Chevrolet will not be left behind as it is preparing to introduce the 2015 Trax.

“Trax offers customers another option in the Chevrolet family and will be a strong competitor in the emerging small-SUV market, which is expected to grow more than 80 percent by 2016,” said Alan Batey, General Motors senior vice president, Global Chevrolet. “The Trax also leverages our global resources and builds on Chevrolet’s strong SUV heritage.”

Chevrolet is truly tapping its global resources to bring the Trax stateside. The compact crossover is essentially a Chevrolet version of the Buick Encore, which itself shares basic vehicle architecture with the Chevy Sonic subcompact. All three vehicles were engineered in Korea, where the Encore and Trax are built (Sonic is built in Michigan for U.S. consumption). Consistent styling across the range allows GM to react quickly to market demands—no matter where those demands lie.

Indeed, the little crossover looks very much like a member of the Chevy family from its large crossbar grille to a strong stance, pronounced wheel arches, giant headlamps, inset foglamps, and sculpted bodysides. Standard 17-inch, or optional 18-inch, alloys give the vehicle upscale presence. Cross an Equinox with a Sonic and you have the right look. Ten vibrant exterior colors include Brilliant Blue Metallic, Orange Rock Metallic, White Pearl Tricoat, Blaze Red, and Deep Espresso Metallic.

Inside it’s a style-fest cribbed from the Sonic. Chevy’s trademark twin-cowl dash design is separated by a seven-inch touchscreen for the MyLink infotainment system. The system uses the touchscreen and voice controls for accessing SiriusXM satellite radio and downloadable apps for connected smartphones like Pandora, TuneIn global radio, and BringGo navigation. I’m a big fan of the perfectly-sized leather-wrapped steering wheel and motorcycle-inspired instrument cluster with digital speedometer and analog tachometer.

The vehicle will be very flexible, too. 60/40 split/fold rear seats feature a flip-down armrest with cupholders. There’s storage in all four doors, four bins in the dash, bins under the rear load floor, hidden storage drawer under the front passenger seat, and pockets in the seatbacks. Base models come with durable cloth seats; upscale models add cloth/leatherette or full leather. Heated thrones will be available.

Moving this totem to utility is the Sonic RS 1.4-liter turbocharged four-cylinder engine and six-speed automatic transmission, delivering 138 horsepower and 148 lb.-ft. of torque. A steep first gear and tall overdrive ensure adequate acceleration and optimized fuel economy. Final specs have not been released, but given the similar Buick Encore, expect at least 25/33 mpg city/hwy.

Underneath is a competent, if not terribly exciting, chassis. Up front is a MacPherson strut arrangement with coil springs and large stabilizer bar. Out back, Trax employs a torsion beam with gas-charged twin-tube shocks. An independent suspension would be better, but having driven the Encore and Sonic, its obvious engineers worked hard to tune the chassis for spirited performance, compliant travel over rough pavement, and a firm ride on the highway. I suspect buyers will lodge few complaints. Choose front-drive for ultimate mpg or AWD to enhance poor weather capability.

Safety was an important consideration. Judging from the Sonic’s strong performance in crash tests, the Trax is expected to be very sturdy. In addition, it will come with a standard rearview camera, driver and front passenger knee airbags, front and rear thorax bags, and two-row side curtain airbags. The crossover should also be available with lane departure and forward collision warning systems à la Sonic.

Globally, Trax is sold in more than 60 markets and launched in Mexico and Canada for 2013. The updated 2015 edition is currently on sale in China. Adding the U.S. to its global roster is a natural fit, giving Chevrolet a great vehicle for this growing segment. Look for it in showrooms early next year. Pricing will be announced closer to its on-sale date, but expect stickers to start below $20,000.