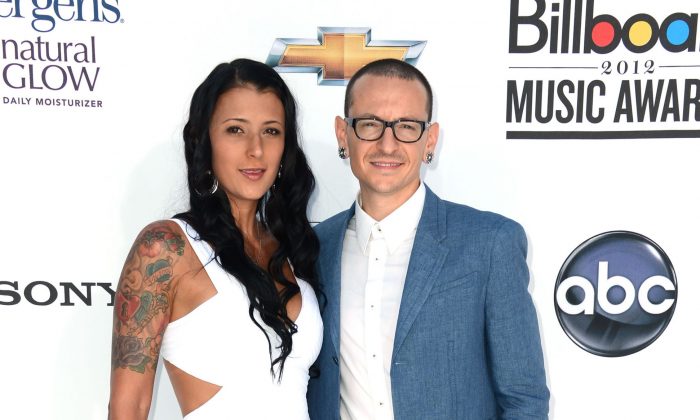 My next tweet is the most personal tweet I have ever done. I'm showing this so that you know that depression doesn't have a face or a mood.

Talinda Bennington, 40, tweeted a video of her husband with loved ones eating a mix of unsavory Jellybean flavors 36 hours before he died.

Before he pops a Jellybean in his mouth, Chester tells the camera he thinks he got a rotten egg flavor “or something else.”

He immediately spits out the unpalatable bean and starts hacking like a cat getting rid of a hairball.

“This is what depression looked like to us just 36 hrs b4 his death. He loved us SO much & we loved him,” Talinda wrote in a caption of the video.

This is what depression looked like to us just 36 hrs b4 his death. He loved us SO much & we loved him. #fuckdepression #MakeChesterProud pic.twitter.com/VW44eOER4k

Talinda and Chester were married in 2006 and have three children together—their son Tyler and twin daughters Lilly and Lila.

“I lost my soulmate and my children lost their hero-their Daddy,” she said in a statement reported by People one week after his death. “We had a fairytale life and now it has turned into some sick Shakespearean tragedy. How do I move on? How do I pick up my shattered soul?”

On a Mom note….. putting my kids to bed each night without the help of their Dad really, really sucks. #FuckDepression #MakeChesterProud

“The only answer I know is to raise our babies with every ounce of love I have left,” she said.

For national Suicide Prevention Week from Sept. 10 to 16, Chester’s 15-year-old son Draven posted a video of himself pledging to seek help before he hurt himself—and challenged others to do the same.

As he speaks, Linkin Park’s 2004 single “Numb” plays in the background.

Talinda has become an advocate for those struggling with depression, taking to Twitter to show her support for those suffering from the disease.

“I want to let my community and the fans worldwide know that we feel your love. We feel your loss as well. My babies are so young to have lost their daddy. And I know that all of you will help keep his memory alive,” she said in a statement. “He was a bright, loving soul with an angel’s voice. And now he is pain free singing his songs in all of our hearts. May God Bless us all and help us turn to one another when we are in pain. Chester would’ve wanted us to do so.”