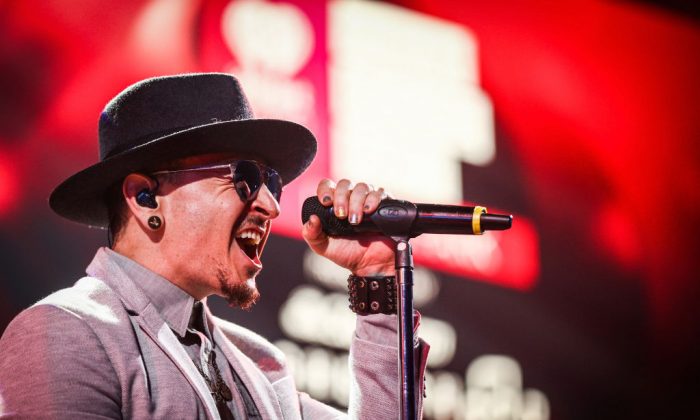 Chester Bennington of Linkin Park performs on stage at the iHeartRadio Album Release Party presented by State Farm at the iHeartRadio Theater Los Angeles in Burbank, Calif., on May 22, 2017. (Rich Fury/Getty Images for iHeartMedia)
US

Chester Bennington’s Ex-Wife ‘Disgusted’ by Funeral: I Will Not Sit on My Hands Any Longer

The ex-wife of the late Linkin Park singer has slammed the handling of Chester Bennington’s funeral.

In a critical 875-word-long Facebook post, Samantha Bennington detailed her experience attending the funeral and the “lack of respect and honesty” that she claimed she saw.

“I’m so disgusted on so many levels!” Samantha Bennington wrote. “There were many friends & family that should have been there but when you turn a funeral into reducing someone’s life into only 12 years that’s what you get!”

In the Aug. 23 Facebook post, Bennington claimed that the private service of Chester Bennington’s life focused too much on his time as a rock star and left out the other important parts of his life, especially his family.

Bennington, who had a son called Draven with Chester before they divorced, claimed that she did not get a chance to speak at the funeral and complained that there was only one photo showing her and her 15-year-old son.

“My son & I have not had an opportunity to speak not even at his funeral (that only represented his life that he was married to his new wife), no photos but one of him anywhere, it was more like checking into KROQ’s Weinie Roast Festival,” she wrote.

Whats more, the ex-wife also claimed that multiple family members were left-out of the funeral program and said the program schedule itself looked “like a cheap happy hour menu.”

Samantha Bennington also accused Bennington’s current wife, now widow, Talinda, referred to as “T” in the post of neglecting to invite her to the bowling celebration after the program and said Draven was “never treated equally” by her.

Bennington said Talinda’s treatment of Draven was one of the reasons he did not want to go back to the home where Chester committed suicide.

“We haven’t had the opportunity to honor his dad properly for his lifetime, & the lack of respect & honesty is just disgusting!”, she wrote. “We do not have a place to go or even any of his ashes!”

Samantha Bennington also said that because Draven did not want to return to Chester’s home, false “rumors” circulated that she was trying to keep her son from his other siblings.

The ex-wife also mentioned two times that the “truth” would eventually come out. Even though she only mentions one person by name in the post, Talinda, she said she was “not speaking to just one person.”

“I hope you like capitalizing on his death … Look in the mirror, I hope you like what you see. Business is business but I see Zero Love,” she wrote. “The frustration is really on so many levels!”

At the end of her post she wrote a last jab to the unnamed people she was criticizing.

“We know who are friends & family are, so if your offended, good then you read this & it applies!”