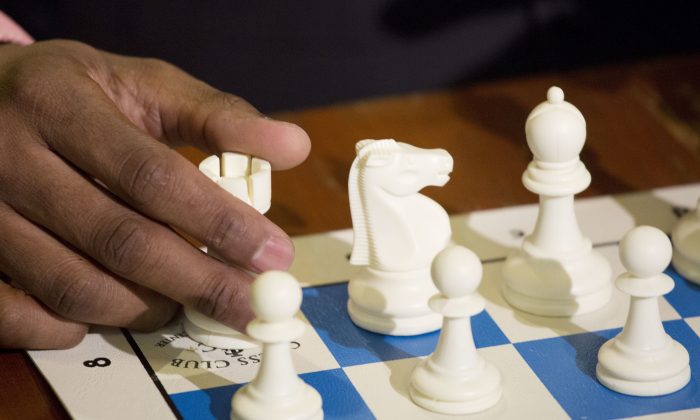 A chess player his hand on a rook piece in a 2016 file photo. (AP Photo/Mark Lennihan)
Europe

A Russian chess robot broke a child’s finger during a match in Moscow, officials said.

A video of the incident shows the robot, which is essentially a large mechanical arm, playing against the unnamed boy. The boy is seen moving one of his chess pieces when the robot appears to grab his finger before officials intervene and free the child from its grasp.

“The robot was rented by us, it has been exhibited in many places, for a long time, with specialists,” Lazarev said, according to a translation. “Apparently, the operators overlooked it. The child made a move, and after that we need to give time for the robot to answer, but the boy hurried, the robot grabbed him. We have nothing to do with the robot.”

He said that the boy was able to compete the next day and “finished the tournament” while wearing a cast on his fingers.

There is no violence in chess, they said.

“The parents want to contact the prosecutor’s office and we will communicate, figure it out, and try to help [the family] in any way we can,” the official told TASS. “And the robot operators … will have to think about strengthening protection so that this situation does not happen again,” Lazarev added.

Sergey Smagin, vice-president of the Russian Chess Federation, told a Russian outlet that the boy “made a move, and after that we need to give time for the robot to answer, but the boy hurried and the robot grabbed him,” reported The Guardian. Regardless, the robot’s operators need to “think again” about safety protocols.

Smagin stressed to state-backed RIA Novosti that the finger-breaking incident was “a coincidence” and claimed the robot was “absolutely safe.”

Russian grandmaster chess player Sergey Karjakin, said it must have been “some kind of software error or something” and said, “This has never happened before. There are such accidents. I wish the boy good health.”

A study carried out in 2015 found that at least one person is killed by an industrial robot in the United States each year. A study published in the U.S. National Library of Medicine, meanwhile, found that 144 people were killed between 2008 and 2013 by medical surgery robots.