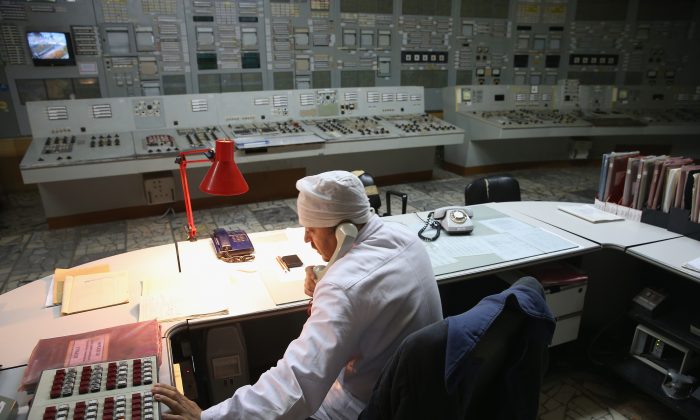 A worker makes a phone call in the control room of Reactor 2 inside the former Chernobyl nuclear power plant near Chernobyl, Ukraine, on Sept. 29, 2015. (Sean Gallup/Getty Images)
Russia-Ukraine War

Workers at the Chernobyl nuclear plant in Ukraine were able to go back home after they spent roughly 600 hours at the facility following its takeover by the Russian military.

In total, 64 workers were evacuated on March 20, which includes 50 employees from the plant and 9 members of the National Guard of Ukraine, according to a Facebook post from officials.

“Please be reminded that the employees were at their workplaces for about 600 hours, having heroically performed their professional duties and maintained the appropriate level of safety,” the post said. The departing employees were replaced with 46 new “employee-volunteers.”

Half of the facility’s technical staff had exited the site on Sunday. The International Atomic Energy Agency (IAEA) was informed on March 21 that the remaining technical staff, except for thirteen members who declined to rotate, left the site on Monday. In addition, most of the Ukrainian guards also decided to stay back on site.

Russian forces have been in control of the nuclear facility since Feb. 24, leaving around 300 people trapped inside and not able to rotate shifts as usual. Russian forces are said to have knocked out power sometime in the second week of this month, triggering a high risk of radiation leak. However, power was restored on March 13.

The new work shift includes two supervisors instead of the typical one to ensure that there is always a backup available at the plant, according to IAEA. An agreement has also been finalized as to how future rotations at the nuclear facility will be organized.

IAEA Director General Rafael Mariano Grossi welcomed the completion of the staff rotation, praising employees for carrying on their duties despite difficult and stressful conditions. Grossi was reportedly holding consultations to ensure the security and safety of all nuclear facilities in Ukraine.

“It is a positive—albeit long overdue—development that some staff at the Chornobyl NPP have now rotated and returned to their families. They deserve our full respect and admiration for having worked in these extremely difficult circumstances,” Grossi said in a March 20 press release. “They were there for far too long.”

Regarding the status of Ukraine’s four operational nuclear power plants that collectively house 15 reactors, eight are currently operational. This includes two reactors at the Zaporizhzhya plant, two in South Ukraine, one at Khmelnytskyy, and three in Rivne.

The Ukrainian regulator informed IAEA that radiation levels at all nuclear power plants are in the normal range and safety systems are running as usual. One research reactor located in the capital city of Kyiv has been put in a state of safe shutdown.