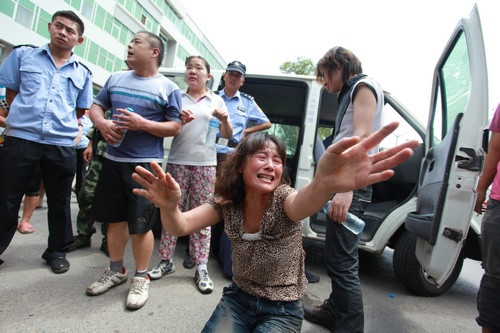 Record of Brutality in China’s Cities: Chengguan in Photos

The execution of the street vendor Xia Junfeng on Sept. 25, 2013 has sparked intense criticism in China of the Chengguan, the urban police force two of whose members Xia was convicted of killing.

The Chengguan—the formal title of this force is the City Urban Administrative and Law Enforcement Bureau—is tasked with enforcing administrative law, in particular the regulation of street vendors. Such regulation has been an opportunity for corruption—as unlicensed street vendors are shaken down by the Chengguan with payoffs a condition for staying in business—and brutality.

In 2009 Xia Junfeng was reportedly beaten by a group of 10 Chengguan on the street in Shenyang and then taken back to the Chengguan station. There, when two began beating him again, he killed them with a folding knife he carried for work at his stand. Xia’s case is not unusual. Beatings are dealt out by the Chengguan regularly, and several deaths have resulted.

This photo gallery shows pictures of some of the victims of Chengguan that have been circulating on the Chinese Internet in recent days. Unfortunately, the photos in most cases were not provided with information identifying the date or location of the incidents pictured.