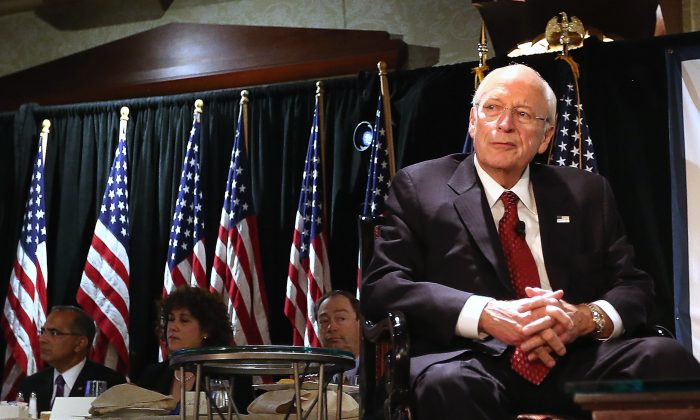 Cheney: ‘Deep Doo-Doo’ for US Amid N. Korea Threats

Cheney delivered the remark to Republican leaders in Congress on Tuesday, according to a GOP aide, reported CNN.

The former vice president also reportedly described North Korean leader Kim Jong Un as unpredictable and who does not share the same world view as the U.S.

Over the past several weeks, North Korea has been stepping up its threats against the U.S. and South Korea, saying it would carry out nuclear assaults.

Amid increasingly combative rhetoric from Pyongyang, Adm. Samuel Locklear, commander of U.S. Pacific Command, said North Korea’s pursuit of nuclear weapons and long-range ballistic missiles represents a clear threat to the United States and its allies in the region.

The admiral said Kim Jong Un, the country’s young and still relatively untested new leader, remains unpredictable after using the past year to consolidate his power.

But Locklear told the Senate Armed Services Committee that he was confident that the U.S. military can thwart North Korea if it chooses to act. He made clear that any U.S. decision would be contingent on where the missile is headed, information that the U.S. could ascertain fairly quickly.

“Do we have the capability to intercept a missile if the North Koreans launch within the next several days?” Sen. John McCain, R-Ariz., asked the admiral.

“We do,” Locklear answered.

He said North Korea is keeping a large percentage of its combat forces along the demilitarized zone with South Korea, a position that allows the North to threaten U.S. and South Korean civilian and military personnel.

McCain said the saber-rattling of today struck him as the greatest tension between North Korea, South Korea and the U.S. since the end of the Korean War in the early 1950s.

“I would agree that in my recollection I don’t know a greater time,” the 58-year-old Locklear said.