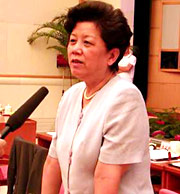 Chen Zhili Under Fire for ‘Commercialization of Education’

Under the leadership of Chen Zhili, the educational system is a disorganized mess which is drawing widespread criticism from angry citizens for the last three years with many claiming the system is becoming a for-profit business. The worst complaint is the unlawful collection of approximately 200 billion yuan (US$25 billion) by the Chinese educational system within a ten year span.

Last December, China’s National Development and Reform Commission said that during an investigation in China’s education system there were 12,600 reports of wrongful collection of money totaling 2.14 billion yuan* (US$268 million).

According to the Director of the Department of Price Regulation, Li Lei, almost every aspect of China’s educational system was subjected to fraud including elementary schools, high schools and universities.
Reforms have complicated the system creating loopholes for funding schools. Many collect money from the system by taking advantage of school reforms. Some areas operating elementary and high schools have changed to a public system funded by the private entities or a private school system with some assistance from public funds. A change like this greatly increases tuition fees.

Another avenue is for the public schools to become partners with companies creating a for-profit school. To get extra funding, schools will enroll more students than the set quota then turn around and overcharge the extra students. Also, schools have embellished their curriculum by adding high cost specialty and accelerated classes which increase the cost of school.

Schools have taken advantage of the public by collecting extra fees during enrollment testing, registration, graduation, switching classes and sponsorship. Some schools also collect fees based on grades with some schools collecting tens of millions of yuan each year this way. But it doesn’t stop there; many must dig deep in their pockets to pay for electronic registration, desks, maintenance of technical devices, diploma, bicycle storage and telephone usage.

The investigation found that by the first half of 2003 five respected high schools had collected over 30 million yuan in the city of Shijiazhuang. At the Political Science University of Southwestern China, Xi’An International Studies University, Wuhan Science and Technology University had collected a sponsorship fee of 5000-10,000 yuan from every person. Yanshan College of Hebei Province overcharged students six million yuan from 2002 until September of 2003. In Haerbin city an elementary school cashed in on the for-profit blitz by collecting over 35,000 yuan for introduction fees.

High tuition and costly school expenses block children of poor families from entering colleges and increases the family’s debt. Some parents have even committed suicide due to their inability to pay for their children’s school expenses.

Examples such as Mr. Zheng in Baoji city, Shanxi province, who jumped from a seventh floor in 2002 because his son’s admission cost for Fudan University was 7000 yuan (US$845) This situtation raises serious concerns about school expenses.

Two other cases also point to the growing pressure on families. Chen Nenggen from Aimin Village Dongbing town, Lishui county, Jiangsu province who committed suicide by drinking a whole bottle of pesticide on August 6, 2003 because he could not collect his daughter’s tuition for college. His daughter, Su Tianjiang, was a top honor student and was admitted to a university in 2003, however financial hardship precluded his father from raising tuition money. He then hung himself out sheer hopelessness.

Admission notices for universities have become killers! The famous lawyer, Qin Bing, commented, “There are serious problems in our education system when issues like this show up.”

In an investigation in Beijing, Shanghai and Guangzhou by the National Bureau of Statistics of China found that more than half the citizens think that the expenses of education have increased too rapidly for them to afford. While citizens in these three cities have the highest income, the effects on other cities such as the rural areas in middle and western China are devastating and the costs far exceeds a family’s yearly income. It is problematic for rural farmers to raise a college student since it can financially crush the family.

Collecting Educational Fees Is The Keystone Of Corruption In Education

Education used to be an honored system but now it is all about profit. In an evaluation survey of 30 government departments in Shenyang in 2002, the education department found itself on the bottom of the list. Teachers are no longer revered but loathed as the public is constantly calling on government leaders to end the corruption.
In the end of November 2003, a Wuhan city Hubei Province high school spent 2 million yuan to hold its 110th anniversary celebration making some faculty members and students upset by the huge spending to cover these costs.

Overcharging students is the primary culprit to accumulate funds for schools, according to parents. While the Price Bureau set a 9,000 yuan (US$11,022) tuition fee for attending students, many schools hike tuition cost from 20,000 to upwards of 50,000 yuan (US$24, 493-61,235). To keep a lid on the secrecy of their tuition fees many schools do not give receipts.

Many blame education reform for the increase cost for education and articles with title like, “Education Reform: The Death Knell Calling For You” are frequently posted on the Internet. Disappointed parents question whether the reform is creating social and educational progress when many impoverished families are unable to send their children to school. Many believe that higher education is only for the rich.

According to Associate Professor Xiao Xuehui, education reform has failed. Xiao says, “The educational reform is like the Pandora box and once opened has released incurable greed resulting in the most massive educational corruption in the history.”