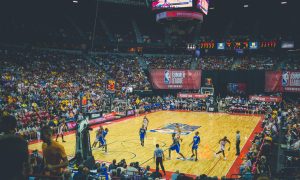 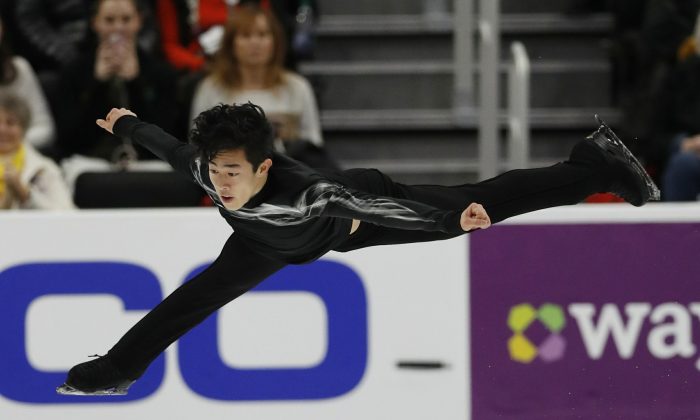 Nathan Chen was skating up to collect his medal — gold, of course — when he tripped on the small carpet in front of the podium and nearly fell.

So maybe he’s not perfect.

Until then, there was hardly any hint of a misstep for Chen, who lived up to his own impressive standard by winning his third straight title at the U.S. Figure Skating Championships. The reigning world champion, Chen was biggest star at this competition coming in, and he won the final event Sunday with a score of 342.22 — over 58 points more than runner-up Vincent Zhou. Jason Brown was third.

“The score definitely took me by surprise,” Chen said. “It was a lot bigger than I was expecting, but ultimately scores are scores. I’m happy with what I did and hopefully I can continue to do that in other competitions.”

Chen’s free skate alone earned 228.80 points, which was higher than the total score for 14 of the 20 skaters.

“Honestly, it’s incredible,” said Brown, who skated immediately before Chen. “I feel so lucky that Nathan is a teammate. That is how I look at him. Obviously, we compete against each other at nationals, but every time we’re on the international stage, we are teammates, and I admire him, and it’s unbelievable.”

The 19-year-old Chen landed four quad jumps in his routine, one of which was in combination. When he wasn’t impressing with his jumping ability, he kept the crowd captivated with his easy, elegant skating to “Land of All” by Woodkid.

Chen began the program with a soaring quad lutz.

“I thought that would be a smart choice, just to put it as the first jump, get that out of the gate, not have to worry about it after,” he said. “I really tried to narrow in on the things that I know make the jump work.”

Next up was a quad flip and a quad toe loop. Those three jumps earned Chen over 47 points, and he hadn’t even started his combinations.

At the Olympics last year, Chen became the first man to land six quadruple jumps in program—that wasn’t enough for a medal, but he did win the free skate. He later won the world title, and now he seems as strong as ever despite balancing training with his studies at Yale.

“I’m just so thankful that Yale has given me the ice time for me to continue pursuing my dreams outside of school,” he said. “I definitely learned a lot more about how to handle my schedule last semester. … It’s just reassuring, knowing that I can handle the two.”

Zhou’s program included four quads as well, but one was downgraded when he fell, and two others were under-rotated. Brown, the 2015 U.S. champion, improved from a sixth-place showing at nationals last year, and he appears to be on an upswing after relocating to Toronto to train under Brian Orser.

Zhou made the podium for a third straight year at nationals, although Chen was blocking his path to victory each time.

“Obviously, I’m happy with the results, but there’s still so much room for improvement, and that gives me hope for the future,” Zhou said. “To achieve what I did here this week and still have … opportunity for growth, is a really great thing. Looking ahead to, hopefully, Four Continents and worlds, I know that I can do even better.”

It’s hard to see how much better Chen could perform, although his costume needed a bit of work — his shirt started to slide up on some of his spins.