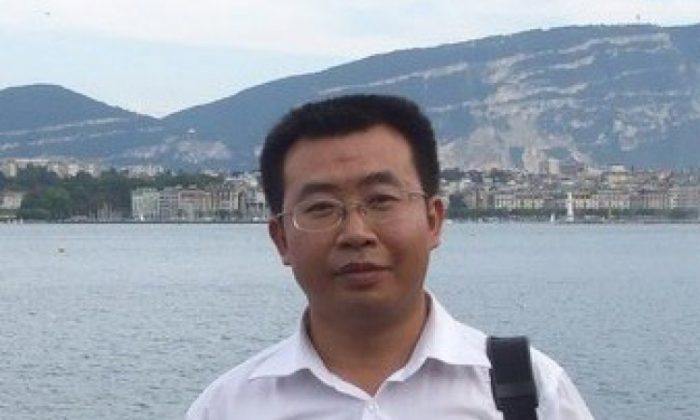 While attempting to visit Chen Guangcheng in hospital, Jiang Tianyong, a civil rights lawyer who defended Chen in 2005, was seized and beaten by domestic security police.

He was interrogated by around 10 domestic security agents after being taken from the Chaoyang hospital where Chen is staying, at around 6:30 pm on May 4. Reached on his cell phone in the late evening on May 5, Jiang was at home recovering from the beating, and under house arrest.

He said that he was taken away by about 10 domestic security police from the Haidian District of Beijing. “They put me in a car and said they were sending me home… I later realized that the road they were taking me on was not the way home.”

They took him to a hotel in the Haidian area, shut him in a room, and gave him something to eat.

A security officer that Jiang identified as Du Yunhui then came at 10:00 pm to “chat.” But “actually he was abusing me incessantly.” Jiang questioned Du back at one point. “He jumped up and beat me. It was very fast and extremely hard, punching me in the face three times, first on my left ear. I thought then that the ear is gone. The second punch was to my right ear, the third to my chest.”

Jiang said he wanted to see the doctor and press charges against Du. Du then asked: “What evidence have you got that I hit you?” Jiang characterized the attitude as “shameless.”

The security officers decided to send him home at about 2 am. Jiang expressed a wish to be taken to the hospital, but they refused, and told him that from now on if he wanted to go anywhere he would have to apply for permission.

At the time of the interview, Jiang said there were at least four plainclothes security officers outside his residence, and that he is not allowed to leave. His wife comes and goes under the graces of the unidentified guards.

“This is a sensitive issue in relations between China and the US, and they don’t want me to participate,” he said. “They said it was the order of higher-ups.”

Jiang Tianyong, like Chen Guangcheng, has advocated for groups in China that have been unjustly treated by communist authorities. In particular he has represented other lawyers targeted for their civil rights work, including Chen, Hu Jia, and Gao Zhisheng. He has also defended Falun Gong practitioners, the spiritual discipline whose adherents are persecuted and whose defenders often become targets. In February 2011 Jiang was extra-legally sequestered for 60 days, and beaten and tortured, a result of the Chinese regime’s anti-Jasmine movement crackdown.