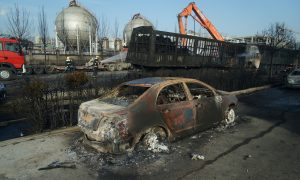 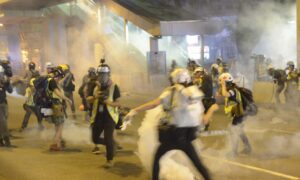 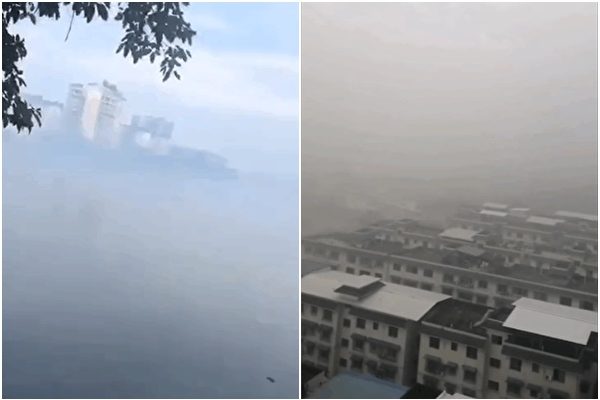 A gas leak occurred in the Wutongqiao district of Leshan, Sichuan, and the entire district was enveloped in thick fog on Aug. 18, 2020. (Provided by interviewee)
China Society

Leaking gas from a chemical plant in Wutongqiao district of Leshan city, Sichuan Province, southwestern China, enveloped the entire district in thick fog, filling the air with a pungent odor. Panicked residents evacuated in a hurry on the morning of Aug. 18.

Local traffic was paralyzed as people fled the city, according to residents who described the evacuation to The Epoch Times. Despite many car crashes, drivers continuously tried to get out of town. Some shops were abandoned as the owners left in a hurry.

A shop owner in Wutongqiao district, who wished to remain anonymous, told The Epoch Times that the smell was particularly strong on the morning of Aug. 18. “At around 7 a.m., I had a hard time breathing and was very uncomfortable. The odor was attacking us. I could smell it even with a mask on. It was very heavy.”

He described the scene when he and his family tried to escape. Everyone was shouting, “Run! Run!” The five of them just ran upwind. It was around 9 a.m. in the morning.

“I didn’t even have time to close the shop.” He continued, “Totally panicked, taking my family with me…it was absolutely a pity…”

“A lot of cars crashed and were abandoned. People just ran to the next county, and the cars were stuck on the road. It was very chaotic. Now that I think about it, it’s really scary and frightening. It’s unforgettable,” he said.

“I will never forget. I ran out of Wutongqiao on foot carrying my elderly parent on my back. It took me a few hours to get out [of Wutongqiao], and then a car came over and the people kindly drove us to a safe place.”

In the afternoon, he returned home to pick up a few necessities. There was no odor in the air but he was not sure if it was safe.

“I don’t feel like talking about it,” he said, crying. “I feel especially sad. I don’t understand why they built a chemical plant in Wutongqiao.”

He said that chemical plants should not be built so close to residential areas. The nearest chemical plant is about three kilometers away from downtown Wutongqiao. He didn’t know how it was built or passed the environmental impact assessment. Many protests by Wutongqiao people have been ignored, he said.

Wutongqiao was just completely submerged by flooding two days ago, and people drowned. “People were already exhausted from trying to rebuild their homes from the flood, but now they have to escape the toxic air,” he said.

A woman in Niuhua town, located within Wutongqiao, told The Epoch Times that she fled around 9 a.m. “I was sleeping this morning, and suddenly I heard someone shouting downstairs: ‘Something happened!’ I woke up immediately, and my mother told me to hurry and leave.”

The chemical plant is about two kilometers from Niuhua town. She had her mask on but the pungent air was so strong that it was hard to describe. She said the road was congested with traffic, and public transportation was stuck.

She evacuated to downtown Leshan and was wandering on the streets. Her parents have gone to stay with relatives in the capital of Sichuan, Chengdu. With nowhere else to go, she has decided to also stay with her relatives for now.

She said that there are quite a few chemical plants in Wutongqiao district. Three of them belong to the Hebang Group. “They release fumes every night. It’s the very unpleasant smell of rotten eggs. We have to close the windows. Quite a lot of people here have suffered from serious illness such as lung cancer and other respiratory diseases. This thing damages your health slowly after a while; you probably don’t feel it at the beginning.” The Epoch Times could not independently verify her claims.

She indicated the smell had started the night before, but the local government insisted that the gas release was within the range of safety standards.

She also mentioned that similar incidents had happened a few years ago.

Sichuan Hebang Investment Group is a conglomerate that operates businesses in the chemical, leather production, and mining sectors.

Wutongqiao Man: I Don’t Dare to Go Back Now

A man in Wutongqiao district told The Epoch Times that when he fled, the traffic was seriously jammed and people could only go outbound instead of inbound. The area has not been declared safe to return to yet.

He said that everyone panicked and evacuated, and some people were notified in advance to evacuate. Wutongqiao is filled with the pungent gas and thick fog almost every day, but it was particularly serious on that day, he added.

He said that the gas leak is real, and not as how Chinese media had reported, “No leak found.”

One Hebang biochemical plant, the largest chemical plant in Wutongqiao, faces a densely populated town. The Yongxiang and Fuhua chemical plants face a high school. Accidents at the chemical plants have occurred before. According to a local resident, the plants release pungent gas that fills the air of the entire city.

He said, “The chemical plant has had leaks more than once. Even explosions have happened before.”

The Epoch Times inquired about the phone number of the Yongxiang chemical plant, but the factory was not registered. A phone call to the Wutongqiao district government office went unanswered.

In a post on the official Weibo social media account of Wutongqiao district, authorities said there were no indicators of hydrogen chloride, hydrogen fluoride, chlorine, ammonia, VOCs (volatile organic compounds), or other chemicals that were found to exceed standards at three monitoring points in Wutongqiao.

When The Epoch Times reached the Niuhua town government office, a male staff member replied that he did not know that many residents had escaped. He also denied that the gas “leaked” and said that the official announcement shall prevail.

When the reporter asked why there was such a thick fog in the air and where it could come from, the staff member said that he was in the office and had not received a notice saying that there was a leak, and the Niuhua town office did not see the fog.

However, many local netizens pointed out that the local government was lying. Some netizens said: “It’s been floating in the air for a few hours, and they still can’t detect what it is. The most ridiculous thing is that the official claimed there’s no leak and it’s a rumor. What was floating in the air? Alien farts?”

A local resident claimed in an internet post that it was trichlorosilane that had leaked and called on locals to evacuate as soon as possible, mentioning that the gas could be explosive.

An anonymous Dr. Li who specializes in chemistry told The Epoch Times that he agrees with the netizen.

“Trichlorosilane will release irritating hydrogen chloride gas, which will form white smoke-like fumes when reacting with moisture in the air, which is consistent with the photo of the thick fog in the local [Wutongqiao] area,” Dr. Li said.

As for the smell of rotten eggs that some local residents described, Dr. Li believed that it may be the smell of sulfur compounds.