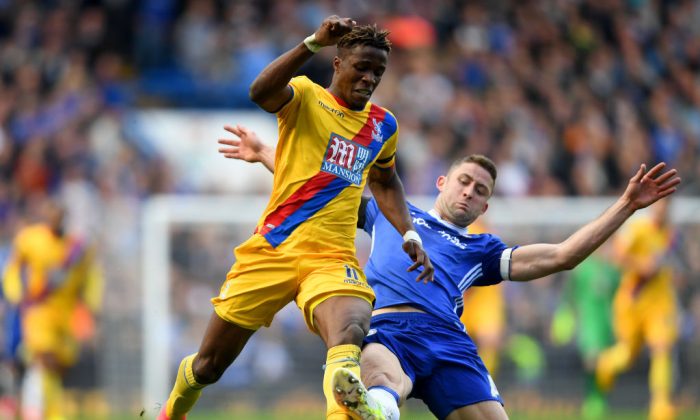 ENGLAND─Chelsea suffered a surprise 2-1 defeat to Crystal Palace at Stamford Bridge to give a glimmer of hope to the chasing pack that there may be a chance of depriving Chelsea of what appeared a certain second EPL title in three years. Chelsea took a 5th minute lead through a smart finish from Cesc Fabregas, but conceded 2 goals in 2 minutes 5 minutes later through a well taken finish from William Saha, and a clever chip from Christian Benteke past goalkeeper Thibault Courtois after being set up by Saha.

Despite then dominating possession and territory, and creating a host of chances, a succession of saves from goalkeeper Wayne Hennessey, and desperate and brave defending from the Crystal Palace defence, Chelsea could not break the Palace resistance to secure a second goal.

Tottenham Hotspur took advantage of Chelsea’s misfortune by securing a 2-nil victory away to Burnley through a short shot from a corner by Eric Dier and a close range finish from Son Heung-min from a cross from Dele Alli. Earlier, Liverpool had gained 3 points in the Merseyside derby with a 3-1 win over Everton. After opening the scoring through Sadio Mane, Liverpool were pulled back by Pennington’s finish from a corner for Everton, but went on to score twice more with a superb strike from Phillipe Coutinho and a goal from substitute Divock Origi.

Manchester United failed to make up ground to secure a top four finish to secure Champions League football for next season when they were held to a nil-all draw at Old Trafford by West Bromwich Albion, despite having virtually all of the possession and nearly all of the chances created, and dropping points after being held to a draw for what they will consider to have been too many occasions this season.

ambitions of both sides in their quest to support or advance their positions as well as the other teams chasing Champions League qualification by finishing in the top 4.

In the relegation battle, apart from the Crystal Palace win, Watford won 1-nil against Sunderland, courtesy of Miguel Britos’ strike, Hull City were 2-1 winners against West Ham after goals from Andy Robertson and Andrea Ranocchia had overturned Andy Carroll’s opener for West Ham, Leicester City were 2-nil victors over Stoke City through goals from Wilfred Ndidi and Jamie Vardy, and Swansea drew nil-all with Middlesbrough.