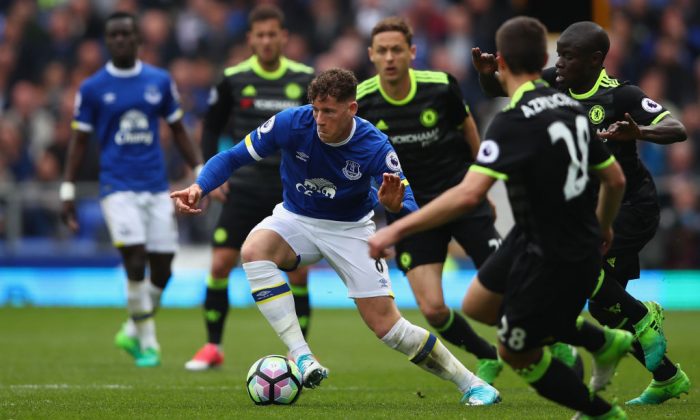 Ross Barkley of Everton attempts to move forward with the ball during the Premier League match between Everton and Chelsea at Goodison Park on April 30, 2017 in Liverpool, England. (Clive Brunskill/Getty Images)
HK Sports

Saturday saw several games impacting the outcome of the battle to avoid relegation from the Premier League, with some tight, tense competition leading to a dearth of goals.

Hull City escaped with a nil-all draw at Southampton to come away with what could prove to be a vital point, after goalkeeper Eldin Jakupovic saved a late penalty. Stoke City and West Ham also generated a nil-all draw, whilst Leicester City won 1-nil at West Bromwich courtesy of a Jamie Vardy strike.

Burnley won 2-nil at Crystal Palace with goals from Ashley Barnes and Andre Gray, whilst Bournemouth consigned Sunderland to the Championship with Joshua King’s late goal proving to be the decider. In Sunday’s games, which mainly impacted the upper echelons of the table, Manchester United drew 1-all with Swansea, Wayne Rooney’s contentious first half penalty being equalised by Gylfi Sigurdsson’s second half free kick. Chelsea were 3-nil victors at Goodison Park against Everton, 2nd half goals coming from Pedro, Gary Cahill and Willian.

Manchester City twice came from behind to draw 2-all at Middlesbrough, goals from a Sergio Aguero penalty and Gabriel de Jesus equalising goals from Alvaro Negredo and Calum Chambers, whilst Spurs overcame Arsenal 2-nil with goals from Harry Kane and Dele Alli. Liverpool face Watford on Monday night.

Chelsea lead the table with 81 points from 34 matches, with Spurs second with 77 points, Liverpool and Manchester City joint third with 66 points, and Manchester United fifth on 65 points al from 34 games, Arsenal sixth with 60 points from 33 games, and Everton seventh with 58 points from 35 games.

Liverpool won 1-nil at Watford on Monday May 1, courtesy of Emre Can’s first half goal, taking them onto 69 points from 35 matches.