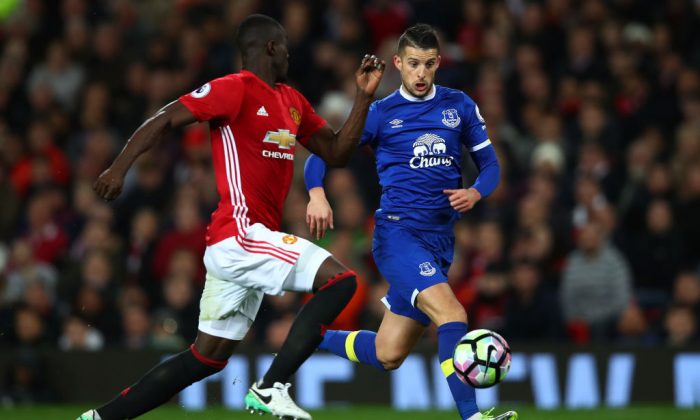 Kevin Mirallas of Everton (R) attempts to take the ball past Eric Bailly of Manchester United (L) during the Premier League match between Manchester United and Everton at Old Trafford on April 4, 2017 in Manchester, England. (Clive Brunskill/Getty Images)
HK Sports

ENGLAND—Playing a day ahead of the other top 6 teams on Tuesday, Manchester United again failed to collect the three points from their home game with Everton to put pressure on the teams above them in the race for a Champions League that comes from a top four finish. Everton took a first half lead from a Phil Jagielka flick that went through goalkeeper David De Gea’s legs and looked comfortable restricting Manchester United before an injury time penalty award that saw Ashley Williams sent off  for the handball. Zlatan Ibrahimovic converted the penalty to spare United’s blushes with a 1-all result, but saw them record their 9th home draw of the season.

In other matches, Watford boosted their position away from the relegation battle with a

In the other games affecting the relegation battle, Hull City were 4-2 victors over Middlesbrough, goals from Lazar Markovic, Oumar Niasse, Abel Hernandez and Harry Maguire for Hull City, against Alvaro Negredo and Marten de Roon’s goals for Middlesbrough, whilst Southampton accounted for Crystal Palace 3-1 in the other game affecting the relegation places, with Christian Benteke’s opening goal for Crystal Palace being countered by goals from Nathan Redmond, Maya Yoshida, and James Ward-Prowse for Southampton.