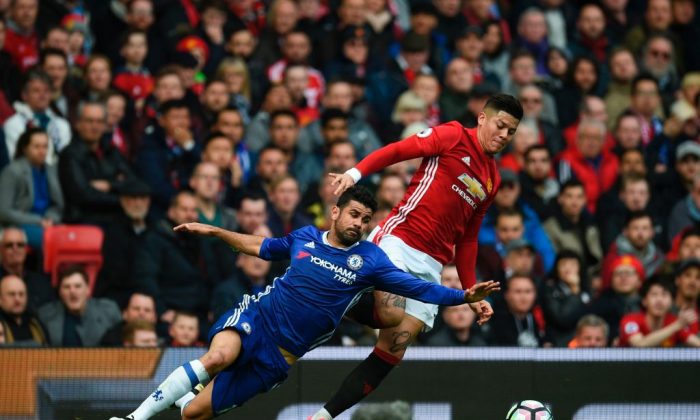 In Saturday’s games, Spurs again took advantage of the early kick off to put Chelsea under pressure for their Sunday visit to Old Trafford by temporarily cutting their lead at the top of the Premier League to 4 points, when they beat Bournemouth 4-nil. This was their second consecutive home win of that magnitude, with goals from Moussa Dembele, Son Heung-min, Harry Kane and Vincent Jannsen.

Crystal Palace pulled back a 2 goal deficit to Leicester City, who led through goals from Robert Huth and Jamie Vardy, to draw 2-all with finishes from Yohan Cabaye and Christian Benteke.

Everton were 3-1 victors at home to Burnley, strikes from Phil Jagielka and Romelu Lukaku being added to by a Ben Mee own goal, eventually overcoming Sam Vokes’ equalising penalty for Burnley.

Watford won their game with Swansea 1-nil, courtesy of Etienne Capoue’s strike. Manchester City were 3-nil victors away at Southampton, courtesy of second half goals from Vincent Company, Leroy Sane, and Sergio Aguero.

In Sunday’s games Liverpool won 1-nil at West Bromwich Albion with the lone goal being scored by Roberto Firmino in first half injury time, whilst Chelsea suffered a 2-nil defeat against Manchester United goals coming from Marcus Rashford and Ander Herrera.

Despite their defeat to Manchester United, Chelsea are still favourites to lift the Premier League title as they need 5 wins from 6 games remaining, with one of those featuring top 7 opposition against Everton.