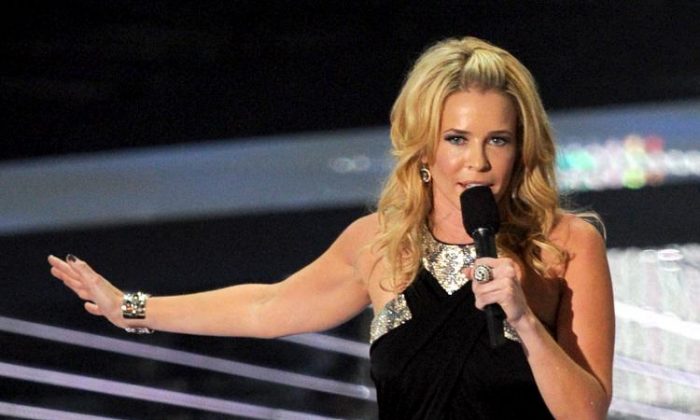 Chelsea Handler, shown above at the 2010 MTV Video Music Awards September 12, will get a prime-time comedy show on NBC, reports said. (Kevin Winter/Getty Images)
US News

While uncontrolled wildfires are engulfing southern California, one celebrity is taking the heat after blaming President Donald Trump for the fires.

Former TV show host Chelsea Handler, an outspoken Trump critic, was recently evacuated from her home where she took the opportunity to blame Trump.

“Just evacuated my house. It’s like Donald Trump is setting the world on fire. Literally and figuratively. Stay safe everyone. Dark times,” she wrote on Twitter on Dec. 6.

Some social media users slammed her for her comments in the middle of a natural disaster.

1st thought: These fires are absolutely tragic. God bless all.

2nd thought: Wow. If Chelsea Handler is tweeting about her hatred of @POTUS during this critical time, she’s sicker than I thought. Sad.

I’m not in favor of people having their homes burn down, but you really do deserve it for the abject stupidity of that one tweet alone. Good Lord you’re a horrible human being…

I'm confused. Could you please explain to me how President Trump is responsible for the current fires in California?

I never thought I had to write this tweet:

No Donald Trump did not start the fire……

It was always burning since the worlds been turning……

Even in times of tragedy and loss, @chelseahandler has time to continue her anti-Trump agenda. Beyond pathetic… https://t.co/nTdh7C584o

Are you freaking kidding? You are facing a huge disaster, our state is literally burning, people have died and lost their homes and pets, & YOU have your panties so in a knot for Trump you can’t stop mentioning him? You need a new therapist, girl. Seriously.

This is not the first time Handler received major backlash for her politically charged tweets. Last month the actress tweeted about the aftermath of the Texas church shooting that left 26 people dead.

“Innocent people go to church on Sunday to honor their God, and while doing so, get shot in killed. What country? America. Why? Republicans,” she wrote on Twitter on Nov. 5.

Her comments attracted criticism from thousands of social media users.

The wildfires have caused widespread panic and have so far forced tens of thousands to flee their homes around Los Angeles.

So far, no civilian casualties have been reported, according to Reuters, although three firefighters have been injured.