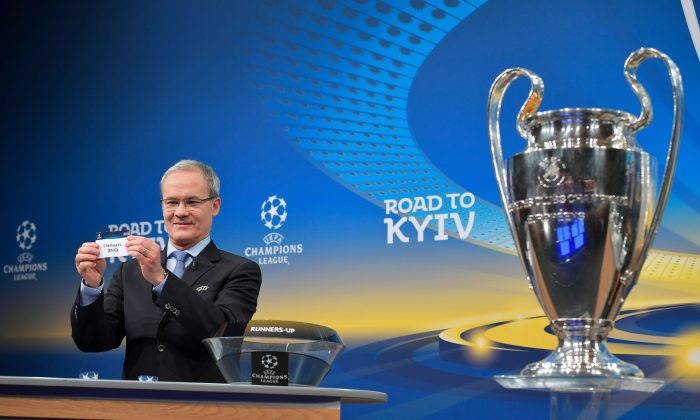 UEFA director of competitions Giorgio Marchetti shows the slip of Chelsea FC next to the Champions League trophy during the draw for the round of 16 of the UEFA Champions League football tournament at the UEFA headquarters in Nyon on Dec 11, 2017. (Fabrice Coffrini/AFP/Getty Images)
International

Chelsea Draw Barcelona in Last 16 of the UEFA Champions League

The draw took place on Monday 11th December for the round of 16, knock out, stage of the UEFA Champions League, which drew the 8 group stage winners against the 8 second placed group qualifiers, with provisos that they could play neither teams from their respective countries, nor teams from the same qualifying group as themselves, which meant that each team faced a different range of potential opponents, and left the worst options open to Chelsea, of the English teams, since the others finished top of their respective groups. Whilst the 4 first placed group qualifiers from England would have been deemed to have received a favourable draw, with the possible exception of Spurs,

Chelsea’s options as opponents were limited to one of the favourites for the competition in either Barcelona or PSG, or Besitkas. In the event, Chelsea drew Barcelona, whilst Liverpool drew Porto of Portugal, Manchester City drew Basel of Switzerland, Manchester United drew Sevilla of Spain, and Spurs were paired with Juventus of Italy, though all will consider themselves as in with a good chance of qualifying for the quarter finals from the home and away leg ties.

Given that no rumoured rival bid appears to have been tabled for Newcastle United, talks are thought to be continuing between the club and PCP Capital Partners, with the stumbling blocks revolving around timing of the proposed deal, a possible penalty clause involving a reduced fee or payback in the event that the club fails to retain its current EPL status, and the linked spending on new players in the upcoming January transfer window aimed at bolstering the squad to achieve the maintenance of their EPL status.

Its believed that manager Rafael Benitez and his staff have identified a number of potential targets, but need to know the quantum of the funds available to them in the window to achieve their desired results, given that their position may be undermined by the perceived lack of activity in the transfer market prior to the start of the season.

With the transfer window opening on January 1, most EPL clubs will have reviewed their squads, and identified both which of their injured players are likely to be available during te remainder of the season, and in which positions additional purchases may be necessary to bolster their squads, and either improve their chances of securing a European place, whether Champions League or Europa League for the teams in the top half of the table,

or to keep them out of the relegation fight or places for those in the bottom half of the table, given that you can effectively perm any 3 from 10 as to which teams may be relegated, given that only 6 points differentiate those teams after 17 rounds of matches.

For the teams in the bottom half of the table, the likely targets will be either a forward that can score the goals to win matches and points to keep them up, or else the creative players, whether wingers or midfield players, that can create the chances or crosses that their current or prospective forwards can convert into goals to save them from relegation.

The other factor to throw into the mix could be players looking to get regular football that helps them get into the respective squads for their countries for the world cup, and those players whose contacts are due to expire in the summer and thus become free agents, and

are also the last chance for their current clubs to secure a fee from their sales. High amongst these possible targets are out of contract players Alexis Sanchez, Mezut Ozil and Jack Wilshere at Arsenal, along with Olivier Giroud trying to get regular football prior to attendance at the world cup with France. Chelsea’s David Luiz and Willian may also be targets at Chelsea given their current lack of a regular starting place and desire to be considered for Brazil, whilst it’s not impossible that Barcelona may revive its pursuit of Philippe Coutinho at Liverpool, nor that some interest is shown in some of Spurs or Manchester United players given their contract positions.