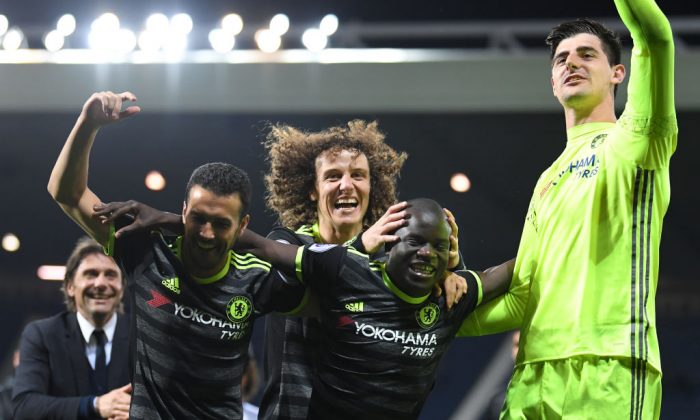 Friday night’s game at the Hawthorns against West Bromwich Albion saw Chelsea claim their second Premiership in 3 years, and fifth since Roman Abramovich became owner in 2003, when Michy Batshuayi came off of the bench to score a late winner for a 1-nil victory. Chelsea celebrated their win before looking forward to finishing their season with home games with Watford and Sunderland.

Everton won their game with Watford 1-nil at Goodison Park, with Ross Barclay scoring a fine long range effort to take the points

Saturday saw Manchester City temporarily leap Liverpool into third place, after a 2-1 defeat of Leicester City at the Etihad Stadium, courtesy of an early opener from David Silva, and a Gabriel De Jesus penalty kick, before Shinzi Okazaki pulled goal back for the visitors, though Leicester were denied an equaliser with the ruling out of Riyad Mahrez’s penalty for kicking the ball twice.

Bournemouth opened the scoring in their game with Burnley with a goal from Junior Stanislas, and then sealed the 2-1 win late on when Joshua King scored two minutes after Sam Vokes had equalized for the visitors.

Southampton were 2-1 victors at Middlesbrough after goals from Jay Rodriguez and Nathan Redmond gave them a 2-nil lead before Patrick Bamford replied for the home side.

Swansea gave their survival hopes a boost at the Stadium of Light when Fernando Llorente and Kyle Naughton scored first have goals to seal the 2-nil win over Sunderland.

In the late game, Arsenal claimed a rare victory at Stoke, leading 2-nil through goals from Olivier Giroud and Mezut Ozil, before Peter Crouch pulled a goal back for Stoke. However, Alexis Sanchez scored the third for Arsenal before Giroud collected his brace and Arsenal’s fourth for a 4-1 win.

In Sunday’s first game, Crystal Palace beat Hull City 4-nil to consign Hull to relegation to the Championship, with goals coming from Wilfred Zaha, Christian Benteke, Luke Milivojevic and Patrick Van Aanholt. Hull join Middlesbrough and Sunderland in relegation to the Championship, the first two in their first season’s return to the Premier League.

In Sunday’s later game, Liverpool won 4-nil at the London Stadium against West Ham, Daniel Sturridge, Philippe Coutinho’s brace, and Divock Origi’s fourth causing the damage, whilst Spurs accounted for Manchester United at White Hart Lane with a 2-1 victory, with Victor Wanyama’s early header, and Harry Kane’s second at the start of the second half giving Spurs a cushion, before Wayne Rooney replied for United. The win means that Spurs ensure runners-up position for the season, whilst the battle for the other 2 Champions League qualification places is now between Liverpool, Manchester City and Arsenal, with the first two the favorites with only 2 games remaining.

Allan Jackson has been involved in soccer for more than 40 years as a player, referee, administrator and freelance write