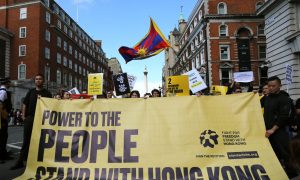 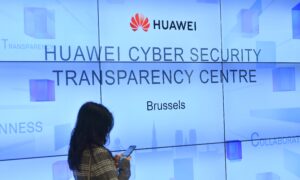 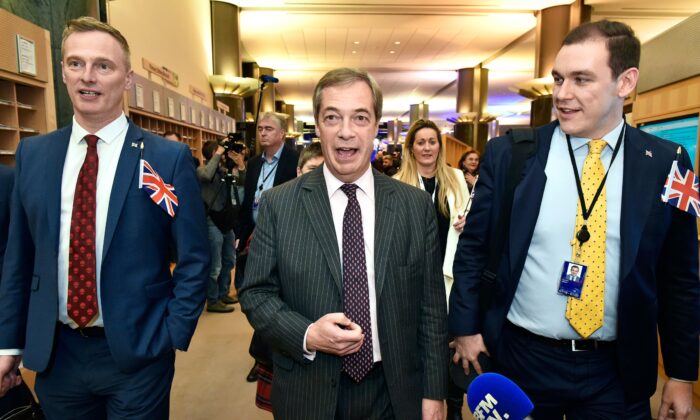 BRUSSELS—The United Kingdom’s raging divisions over Brexit showed few signs of dissipating as the country’s elected representatives in Brussels bowed out with tears, laughter, and singing.

Most of the UK’s 73 members of the European Parliament left their seats for the final time moments after the chamber voted 621 to 49 to give its backing to Prime Minister Boris Johnson’s deal on Jan. 29.

During a final debate on Brexit, euroskeptics frequently booed and jeered their pro-EU counterparts, who, in turn, clasped hands and sang the traditional Scottish song Auld Lang Syne in protest as the vote passed.

Most of the chamber stood for several minutes to sing the folk tune to words penned by Robert Burns—which is usually belted out on New Year’s Eve—and there was loud cheering and applause at the end.

Nigel Farage, the veteran Brexiteer who has been a thorn in the side of successive Conservative governments, ended up casting his ballot in favor of an agreement he once described as “the second-worst in history.”

The leader of the Brexit Party likened those Brexiteers holding out against the deal to King Canute, who has come to be known in popular culture as incompetent and cowardly, despite his historic accomplishments.

Farage, who said he would miss being the “pantomime villain” of the piece, bowed out of Brussels politics after more than 20 years with a series of jibes at the EU’s “anti-democratic” nature that drew loud protests.

He told the final Brexit debate in the European Parliament that while he “doesn’t like” Johnson’s deal, he’s been reassured by the prime minister’s promises of a clean break with EU rules.

The long-serving member of the European Parliament (MEP) left the chamber for the last time in an antagonistic style fitting of his tenure.

First, he had his microphone cut off for waving a Union Jack flag at the end of his speech, which is against the Parliament’s rules. Then he and his fellow euroskeptic MEPs joined in a chorus of cheers before they marched out triumphantly.

In a speech, Conservative MEP Dan Hannan, a key architect of Brexit from Johnson’s ruling party, blamed Brussels for the UK’s exit.

“Faced with the departure of its second financial contributor, the EU still was not prepared to allow any devolution of powers. That made a parting of ways inevitable,” Hannan said.

He told his fellow representatives from across Europe: “I wish you well. You are losing a bad tenant, but gaining a good neighbor.”

However, even at the point of Britain’s exit from the EU after its 47-year membership, more UK representatives voted against the agreement struck by the two sides than for it.

There were emotional scenes and anger as pro-European members from Britain and their anglophile colleagues from across the continent stood up to express dismay that the UK is leaving.

Green MEP Molly Scott Cato, who represented South West England, burst into tears as she gave her final speech. She was hugged by a colleague as she collapsed into her seat and others around her stood to applaud.

Caroline Voaden, from the pro-EU Liberal Democrat party, described the mood as “very somber” and defiantly vowed, “We’re still Europeans. For now we say merci, au revoir. This is not goodbye.”

Representatives from across Europe also expressed sadness and anger at the loss of the UK, and there were repeated cries of “lies” from the chamber as pro-Brexiteers spoke.

Nathalie Loiseau, a former French Europe minister, said: “My deep feeling is there is no good Brexit. I’m still convinced we’re better off together than we will be apart.”

“‘Only in the agony of parting do we look into the depths of love.’ We will always love you, and we will never be far,” she said to warm applause.

As a parting gift, each of the UK’s 73 MEPs was handed a specially covered book about European history, paid for by the Parliament’s president, David Sassoli.