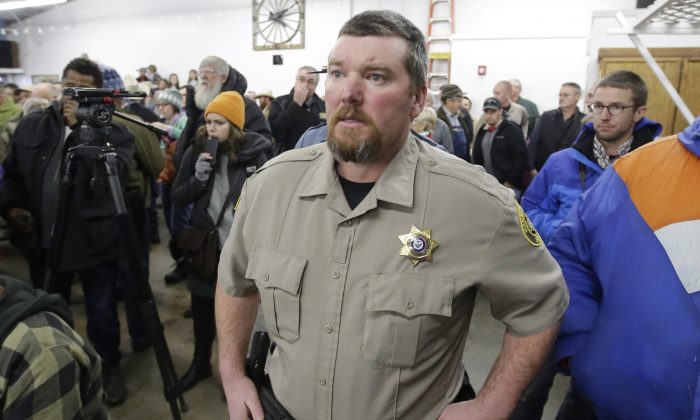 Cheers for Sheriff Who Tells Armed Group to ‘Go Home’

BURNS, Ore.—Cheers erupted at a packed community meeting in rural Oregon when a sheriff said it was time for a small, armed group occupying a national wildlife refuge to “pick up and go home”.

The group objecting to federal land policy seized buildings at the Malheur National Wildlife Refuge on Saturday. Authorities have not yet moved to remove the group of roughly two dozen people, some from as far away as Arizona and Michigan. The group also objects to a lengthy prison sentence for two local ranchers convicted of arson.

“I’m here today to ask those folks to go home and let us get back to our lives,” Harney County Sheriff David Ward said Wednesday evening.

I’m here today to ask those folks to go home and let us get back to our lives.
— David Ward, Harney County sheriff

Schools were closed following the seizure of the refuge because of safety concerns in this small town in eastern Oregon’s high desert country and tensions have risen. Ward told the hundreds gathered at the meeting he hoped the community would put up a “united front” to peacefully resolve the conflict.

Group leader Ammon Bundy has told reporters they will leave when there’s a plan in place to turn over federal lands to locals.

Several people spoke in support of Bundy and his followers at Wednesday’s meeting.

“They are waking people up,” said 80-year-old Merlin Rupp, a long-time local resident. “They are just making a statement for us, to wake us up.”

Earlier Wednesday the leader of an American Indian tribe that regards the preserve as sacred issued a rebuke to Ammon’s group, saying they are not welcome at the snowy bird sanctuary and must leave.

“The protesters have no right to this land. It belongs to the native people who live here,” Burns Paiute Tribal leader Charlotte Rodrique said.

The protesters have no right to this land. It belongs to the native people who live here.
— Charlotte Rodrique, Burns Paiute Tribal leader

Bundy is demanding that the refuge be handed over to locals.

Rodrique said she “had to laugh” at the demand, because she knew Bundy was not talking about giving the land to the tribe.

The standoff in rural Oregon is a continuation of a long-running dispute over federal policies covering the use of public lands, including grazing. The federal government controls about half of all land in the West. For example, it owns 53 percent of Oregon, 85 percent of Nevada and 66 percent of Utah, according to the Congressional Research Service.

The Bundy family is among many people in the West who contend local officials could do a better job of managing public lands than the federal government.

The argument is rejected by those who say the U.S. government is better equipped to manage public lands for all those who want to make use of them.

Among those groups are Native Americans.

The Burns Paiute tribe has guaranteed access to the refuge for activities that are important to their culture, including gathering a plant used for making traditional baskets and seeds that are used for making bread. The tribe also hunts and fishes there.

Rodrique said the armed occupiers are “desecrating one of our sacred sites” with their presence at refuge.

Bundy’s group, calling itself Citizens for Constitutional Freedom, says it wants an inquiry into whether the government is forcing ranchers off their land after Dwight Hammond and his son, Steven, reported back to prison Monday.

The Hammonds are long-time local residents who have distanced themselves from the group Bundy’s group. They were convicted of arson three years ago and served no more than a year. A judge later ruled that the terms fell short of minimum sentences requiring them to serve about four more years.

At the emotional community meeting Ward, the county sheriff, said he understood the problems some had with the ranchers’ court case. However he said people needed to express but their anger peacefully and lawfully.

“I’ve got my own frustrations, we’ve got visitors in town that have their frustrations, but there’s appropriate ways to work out our differences,” he said.