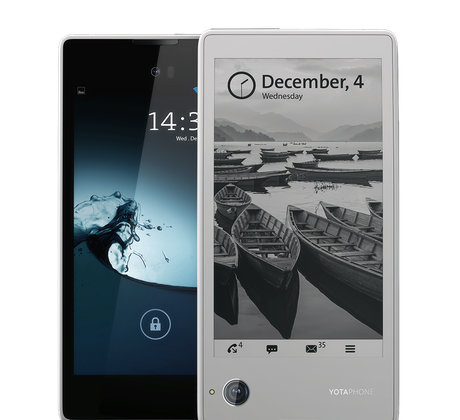 Perhaps you heard of the first YotaPhone but most likely not and don’t feel bad, it’s a very rare device. The YotaPhone is a dual screen smartphone made by a Russian manufacturer called Yota Devices and it’s remained more of a limited exposure or knowledge, even in the tech world.

It’s the first of its kind as the YotaPhone launched with a LCD screen on the front and an e-Ink display on the rear. I’ll get into a description of the functionality of this display in a minute. All you need to know is that there’s a successor coming out soon and that you should take notice.

If you click on to the YotaPhone, you’ll see that the original YotaPhone was quite square and a bit blocky. Even weirder is the camera lens at the bottom rear of the phone.

Thankfully, the first images of the YotaPhone 2 are showing a better looking device. The camera lens is in a normal place in the center of the top of the back of the phone.It actually looks almost like the first generation Moto X. The result is curvaceous, sleek device and looks quite normal from the front.

Around back, you have that camera lens but you also have the second screen. Why would you need an e-Ink screen? Well, in the same vein of wearables, Yota Devices is trying to save you time and battery life by displaying information on the much more battery friendly screen.

So say you need to check the time, all you need to do is look at the back of your phone instead of unlocking your whole screen. It not only does the time, it does notifications as well so no more wasting battery life. You can also save screens to the back screen that you can still view even if your battery dies.

A nice upgrade from the first YotaPhone is the specs. The screens have been upgraded, which is always nice, but the biggest deal is the internal specs. Everything has been upgraded to about the same level as all the top flagship smartphones these days. The first YotaPhone wasn’t very impressive but Yota Devices did a good job of upping the ante without increasing the price.

Of course, the price is speculative at this point but the rumors indicate that the price will stay about the same. The first YotaPhone was under $300 so here’s hoping for another cool device for pretty cheap!