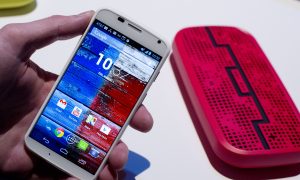 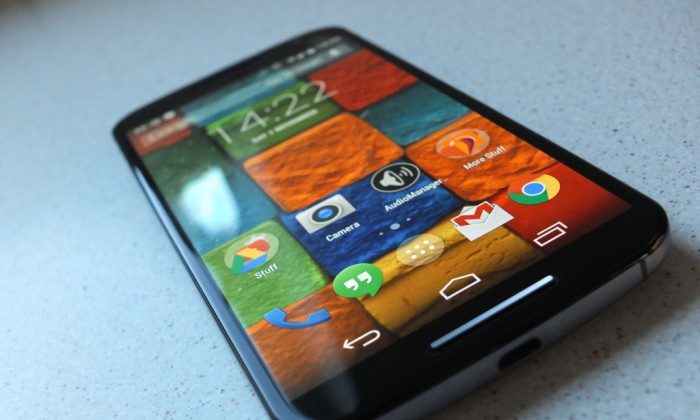 Motorola last year showed the world that you didn’t need to have the highest possible specs to create a really decent phone. Last year’s Moto X was behind the rest of the pack spec wise and it offered a really good package, this year’s model they’ve increased the specs and as such it’s now up there with the other flagships.

I’ve been using one for the last few weeks now and it’s prime time to bring you my review, starting of course with my good and bad points.

The new Motorola Moto X is a fine looking phone. When I first heard how they’d chosen to increase the size of the phone I was worried. Part of the Moto X dynamic was that it easily manageable in one hand and thanks to some tiny bezels it’s not too big and you can quite easily use it one handed. Unless you’ve got tiny hands that is.

From the front of the Moto X you can almost instantly tell it’s a Motorola, no branding. Just a large screen, some tiny bezels and two speaker grilles. The glass actually looks really appealing, with a slight curve at the edges. It almost encourages you to have a feel of its curves.

Those grilles on the front aren’t both speakers though and they do become a little annoying. The top one is the earpiece and the bottom one is a speaker. Both grilles are actually a solid piece of metal which protrudes from the screen, but the top one kind of gets in the way when you slide down the notification bar.

You’ll soon learn to swipe beside it instead though. The front of the phone also houses the front facing camera and the various sensors too.

The back of the phone is where all the fun happens, or it does if you’ve ordered a MotoMaker version anyway.

The hardware on the Moto X is pretty good this year. It easily rivals the competition.

A few things need pointing out here. Starting with the 16GB model, out of the box you get about 9GB free, which isn’t great. Especially as there isn’t a Micro SD slot on the Moto X.

The battery is only 2300 mAh, which is a bit of a let down. In medium usage I could get through a day, see the separate battery life section for more details. Qi Wireless Charging isn’t present here either, it would have things a lot easier keeping the Moto X topped up.

The Nano SIM is more prevalent than it was last year with the original Moto X. I even now have one of my main SIM cards as a Nano SIM. Many phones around these days have Nano SIMs so swapping devices is easy. Although if you want to try the Moto X out you’ll need to somehow get a Nano SIM.

The display in my eyes is one of the main things about the Moto X, the display is a 5.2″ AMOLED unit. Colours are bright and warm, viewing angles are wide and not in the slightest distorted and the Oleophobic coating on the display really keeps fingerprints at bay.

The tiny bezels around the display make for a reasonably manageable device with a decent sized screen, similar to what LG have done on the G3.

Motorola used to make a mess all over Android, in recent times they have been an advocate of stock Android. They basically make the most Nexus like non Nexus devices.

It is one of things that Motorola have got right across the board. All of their phones basically run stock Android with a handful of software additions and a few Motorola exclusive apps that you’ll find in the Play Store.

With the Moto X Motorola add a contextually aware processor to almost sense what you’re doing or trying to do. It mostly revolves around the overlay lockscreen, which I’ll look at shortly.

There is also an app called Moto which is the central hub for all the fancy things the Moto X can do, be it voice recognition, muting itself during meetings and reading out your messages whilst your driving.

Motorola have chosen to use the Google Now Launcher, which means a swipe to the right opens up Google Now and also shouting out “OK Google” will trigger the listening mode. Running stock Android does however mean you only get the basics installed out of the box, no fancy gallery or media player and no file manager.

Some may say that the pre-installed Google ones are adequate, I always end up looking for alternative third party apps with extra functionality.

The lockscreen on the Moto X is quite useful, or it is if your phone will be sat on a surface for most of the day with you glancing at it now and again.

Basically you have a normal lockscreen and then an overlay on top of that, the overlay wakes up when you get a notification and if you interact with the overlay you can unlock the device and be taken straight into the app displaying the notification.

You can also trigger the overlay by moving your hand near to the phone and also by moving it, so you just want to see the time or something you can easily wake it. As the display is an AMOLED display only the parts of the screen that are used actually draw power so it doesn’t really affect battery life.