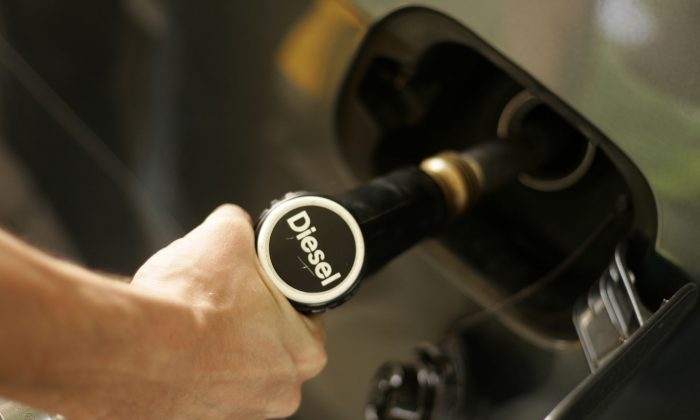 Cars and trucks in the United States are supposed to achieve great fuel efficiency gains over the next decade. But now that gasoline prices have plunged, those plans may be delayed.

In 2012, the National Highway and Traffic Safety Administration (NHTSA), in collaboration with the Environmental Protection Agency (EPA), issued regulations that require automakers to meet progressively more stringent fuel standards to reduce greenhouse gas (GHG) emissions. The regulations, which cover cars and light trucks from model years 2017 to 2025, will require automakers to reach a corporate average fuel efficiency (CAFE) standard of 41 miles per gallon by model year 2021. Then, the average fuel efficiency for automakers’ vehicles needs to reach 54.5 MPG by model year 2025.

But the exact details of rules and the timing of their implementation are not cast in stone. Next year, the initial set of targets will come up for review, and executives at car companies have already suggested pushing out the timetable for complying.

As this midterm review approaches, the key questions to consider are: first, how have fuel price projections changed since the period in which regulations were initially developed (2009-2012), and, second, what are the implications of these changes on regulatory implementation?

In a recently published study, my colleagues and I suggest how to reevaluate vehicle fuel economy and greenhouse gas regulations in the upcoming midterm review in light of the dramatic changes in the price of gasoline.

Among our suggestions is that fuel economy standards should be reevaluated during the midterm review to take into account expected lower fuel price and how low prices affect consumer interest in fuel-efficient vehicles.

As anyone who has filled up lately knows, there has been a significant decrease in fuel prices since the federal CAFE and vehicle GHG regulations were developed. As a result, official government projections of fuel prices have been revised downward and remain relatively low through 2030.

Back when the regulations were being formed, the NHTSA and EPA used gasoline price projections based on the early release of the 2012 Annual Energy Outlook of the Energy Information Administration (EIA) to estimate monetary savings under the regulatory program. The projection path included the following assumptions for the price per gallon of gasoline: US$3.53 in 2015, $3.76 in 2020, $4.04 in 2030 and $4.57 in 2050.

Since then, the world oil market has undergone significant changes. Prices have fallen, with the national average price in 2015 being $2.31. EIA has revised its forecasts and now expects the average national price of fuel at $2.74 in 2020 and $3.20 in 2030.

These changes in the fuel price environment are noteworthy because consumer interest in fuel-efficient vehicles wanes with lower fuel prices and rises when prices at the pump are higher.

A longer payback period can translate to lower consumer interest and, ultimately, lower vehicle sales. Sales of the hybrid Toyota Prius, for example, fell for the first time in 2015.

Thus, in light of changes to fuel price projections, and related expectations about consumer payback periods and new vehicles sales, my colleagues and I concluded that federal CAFE and vehicle greenhouse gas regulations should be reevaluated during midterm reviews.

How should regulators alter the fuel efficiency targets in a way that considers environmental goals, consumer interest and the economic impact of vehicle sales?

Take the Renewable Fuel Standard Down to Zero

Regulators could link the pace of the efficiency targets to EIA forecasts of fuel prices for model years 2022-2025. EIA will publish forecasts of 2025 fuel prices annually between now and 2025, drawing from the best available information on global oil markets and other factors that influence fuel prices in the U.S.

Using those data, regulators could adjust the requirements for complying with the regulations.

Here is a hypothetical illustration of how fuel-price forecasts might be linked to regulatory requirements. If EIA’s fuel price forecasts for 2025 rise significantly above $4 per gallon by 2020, then the federal requirements for model years 2022 to 2025 might remain as currently scheduled.

The review process formally kicks off in mid-2016 when the NHTSA and EPA publish a draft technical assessment report. Given how much has changed since the rules were first written, it makes sense for regulators to reconsider these rules. A good way to do that would be to explicitly link gas prices with fuel efficiency mandates. Although this linkage could delay the rules’ implementation, this method ultimately achieves both environmental and economic goals.

Saba Siddiki is an assistant professor of public and environmental affairs at Indiana University-Purdue University Indianapolis.