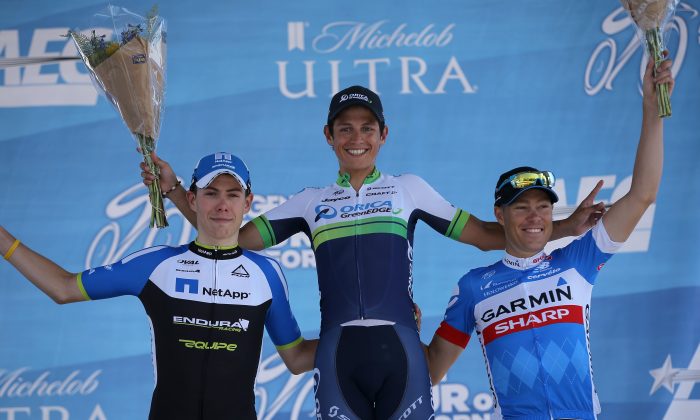 (L-R) David De La Cruz of Netapp-Endura in second place, Esteban Chaves of rica GreenEdge in first place and Tom Danielson of Garmin-Sharp in third place stand on the podium for Stage Six of the 2014 Amgen Tour of California from Santa Clarita to Mountain High on May 16, 2014 in Wrightwood, California. (Doug Pensinger/Getty Images)
Cycling

Orica-GreenEdge rider Johan Esteban Chaves joined five other riders in a breakaway 25 km into the 156-km Stage Six of the ninth Amgen Tour of California, and stayed out front the rest of the day, launching a solo attack 4.7 km from the finish line and winning the stage by 13 seconds.

“Today I felt so good,” Chaves told Cyclingnews.com. “Just in the last four km I was afraid that the chase with all the guys from the overall would catch us. But I felt so good in the last three km, and the climb was steep, so I tried, and I got the victory. I knew that I had one opportunity to win the stage, and I knew that the victory was for me in just the last one-and-a-half or two kilometers.”

The final climb up Mountain High was very long; it’s listed at 11 km but the road inclines forty km from the finish and gets steeper as it rises. Just in case the four climbs and a summit finish didn’t offer sufficient challenge, the temperature—105 degrees—upped the ante.

The majority of the climb proper is around eight or nine percent gradient, and the final three km hit over ten percent.

The stage offered the last opportunity for General Classification contenders to take time back from race leader Bradley Wiggins. Wiggins however had the all-powerful Sky team to guide him to the top with unrelenting speed, and that is exactly what happened on Mountain High.

Garmin-Sharp’s young Aussie rider Rohan Dennis was 28 seconds behind Wiggins in GC; he needed to crack his British rival early on the final climb to have a chance at the overall.

Garmin had the right strategy: they put one of their best climbers, Tom Danielson, in the break, giving Rohan Dennis an ally up the road for when he attacked.

Garmin continued its plan with an attack from Ben King 14 km from the summit. King could either have joined the break, three minutes up the road, or waited in the middle to support a long attack from Dennis.

For Sky, it was all business as usual. The team has perfected its strategy of driving the pace so high that no one can launch a successful attack, burning out its own riders and the opposition until the leader is the only one left—when that leader is Bradley Wiggins or Chris Froome, either can climb with any other GC contender in the sport.

Sky’s plan played out perfectly. Ben King’s attack simply fizzled—after 150 km up three categorized climbs at maximum speed, he didn’t have the legs to bridge across, or even to stay away. Joe Dumbrowski buried himself for Sky, pulling the peloton up the final climb at a ridiculous pace, shelling riders out the back until on a dozen remained in the yellow jersey group, two minutes behind the break still.

Chavez made his move 4.7 km from the peak, just as Bobridge reattached to the lead group. De La Cruz tried to follow; Danielson could not.

Garmin wasn’t done. Colombian climbing demon Janier Acevedo—who made his name with an amazing summit finish in last year’s Tour of California—attacked the remnants of the peloton 3.7 km from the finish. Despite his ability, he couldn’t get away, and was reabsorbed a kilometer later.

Sir Bradley Wiggins of Sky defends the overall race leader’s yellow jersey against Rohan Dennis of Garmin-Sharp and Peter Stetina of BMC on the final climb in Stage Six of the 2014 Amgen Tour of California. (Doug Pensinger/Getty Images)

BMC’s Peter Stetina attacked at the 1.9-km mark; Dumbrowski covered it, and Wiggins, as is his wont, simply grinded his way along until he caught Dumbrowski. By this point on four riders could hang with the Sky pair—Stetina, Dennis, Orica’s Adam Yates, and Cannondale’s George Bennett—and Bennett didn’t last much longer.

Dumbrowski finally fell aside at the flamme rouge (the 1-km banner) and Wiggins took over, climbing steadily at a ridiculously fast pace through the final 1000 meters.

Rohan Dennis knew that Wiggins couldn’t respond to sharp attacks, but Dennis couldn’t launch an attack—he needed all his energy to maintain Wiggins’ pace, and couldn’t gather up enough oxygen to accelerate.

Chavez took his biggest victory, with De La Cruz and Danielson behind him. Adam Yates put in a final dig, fighting for a place on the GC podium. Rohan Dennis actually faded at the finish and lost another two seconds to Wiggins.

There is no shame in losing to Sir Bradley Wiggins. The former track champion, 2012 Tour de France winner, multiple Olympic gold medalist, is at 34 still in the peak of his career. Dennis, 23, still has to gain the stamina that further years of training will bring. Dennis still sits second overall, and will almost certainly finish somewhere on the GC podium.

Bradley Wiggins spoke to NBCSN after the stage, giving a bit of insight to what goes on in the heads of the riders fighting to win a race.

“Surprisingly I felt quite good until about four K and then the altitude really kicked in. All of a sudden it went from being quite a big group to a very little group straightaway.

“I just faked that I was a little dead for a minute to get Pete [Stetina] to attack, and that almost finished Pete off. Rohan, right in front of me there, didn’t really know if I was tired or not.

“I just waited until I had a K to go and then I knew I could wind it up to the line. A little bit of sort of tactical bluffing, but it worked and that’s probably one of the biggest days down now.”

Barring accident, Wiggins will win the Tour of California, and will cast a very dark and frightening shadow over his rivals for the Tour de France.

The next two stages of the Tour of California will be sprinters’ shows. There are virtually no opportunities for a rider to make a serious advancement in GC. Wiggins will win; Dennis will have to be satisfied with Garmin winning the team classification for the second year in a row.

Rohan Dennis will have his glories; he is still young. This year is, once again, the year of Bradley Wiggins, it seems. Others will have to wait.