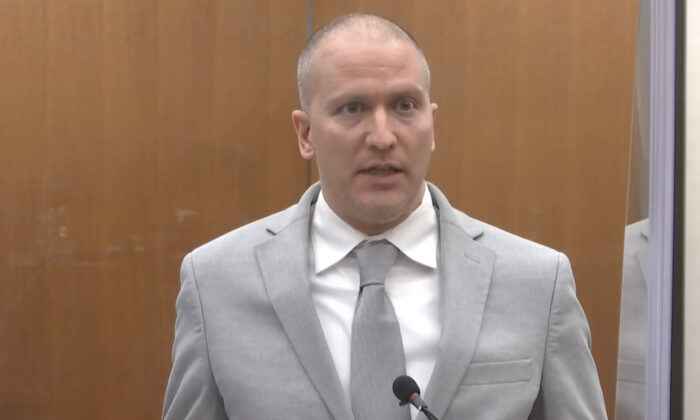 MINNEAPOLIS—Former Minneapolis Police officer Derek Chauvin appears to be on the verge of pleading guilty to violating George Floyd ‘s civil rights, a move that would remove him from a federal trial but could significantly increase the amount of time he’ll spend behind bars.

A notice sent out Monday by the court’s electronic filing system shows a hearing is scheduled for Wednesday for Chauvin to change his not guilty plea. These types of notices typically indicate a defendant is planning to plead guilty, though nothing will be official until it happens in court.

Chauvin has already been convicted of state murder and manslaughter charges for pinning his knee against Floyd’s neck during a May 25, 2020 arrest. He was sentenced to 22.5 years in that case.

A message left with Chauvin’s attorney, Eric Nelson, was not immediately returned. The U.S. Attorney’s Office had no comment.

Chauvin and three other former officers—Thomas Lane, J. Kueng and Tou Thao—were indicted earlier this year on federal charges alleging they willfully violated Floyd’s rights. They were set to go to trial in late January.

Chauvin’s plea could be a positive for the other three. They had asked the court to separate their trials from Chauvin’s, arguing that his presence would hurt them before a jury, but that request was denied. Mike Brandt, a local defense attorney not connected to the case, said a trial without Chauvin could reduce some of the inflammatory evidence jurors would see.

Brandt has also said that if Chauvin pleads guilty, he can be compelled to testify—which could benefit the others if he says he was the veteran officer who made the decision to do what he did.

The information sent out Monday gives no indication that the other officers intend to plead guilty. Messages left for their attorneys were not immediately returned.

Mark Osler, a professor at the University of St. Thomas School of Law, said any potential prison time that Chauvin would face in the federal case would likely be served at the same time as his state sentence—but the federal term has the potential to be much longer, up to life in prison.

By claiming responsibility, Chauvin can reduce his federal sentence. Though rare, Osler said he could also arrange to serve his sentence in the federal system, which could benefit him since he has been in solitary confinement in Minnesota. Brandt added that Chauvin would still have notoriety in the federal system and might still need to be segregated.

“I’m guessing he actually negotiated something that would allow him to see the light of day before he leaves the earth,” Brandt said.

But the federal system has no parole, so even with a reduced federal sentence, Chauvin could spend more time behind bars.

In Minnesota, defendants with good behavior serve two-thirds of their sentence in prison, and the remaining one-third on supervised release, also known as parole. Under that formula, he’s expected to serve 15 years in prison on the state charges, and 7.5 years on parole.

Under sentencing guidelines, Chauvin could get a federal penalty ranging from 27 years to more than 33 years in prison, with credit for taking responsibility, Osler said. But the guidelines are not mandatory, and Osler estimated Chauvin would be sentenced toward the lower end of the range.

According to evidence in the state case against Chauvin, Kueng and Lane helped restrain the 46-year-old Floyd as he was on the ground—Kueng knelt on Floyd’s back and Lane held down Floyd’s legs. Thao held back bystanders and kept them from intervening during the 9.5-minute restraint.

All four former officers were charged broadly in federal court with depriving Floyd of his rights while acting under government authority, but the federal indictment broke down the counts even further. A count against Chauvin alleged he violated Floyd’s right to be free from unreasonable seizure and from unreasonable force by a police officer.

Thao and Kueng are charged with violating Floyd’s right to be free from unreasonable seizure by not intervening to stop Chauvin as he knelt on Floyd’s neck. All four officers are charged for their failure to provide Floyd with medical care.

It was not immediately clear if Chauvin plans to plead guilty to all or some of the federal charges against him in Floyd’s death.

Osler said he’s not surprised the other three former officers don’t seem to be involved in this plea deal because they would likely face much lesser sentences than Chauvin if convicted.

If they were to plead guilty, Osler said, the other three would likely want “a plea deal that would wrap up both the state and federal charges.”

The other three men were also charged in state court with aiding and abetting murder and manslaughter. They are scheduled to go to trial in that case in March.

Chauvin is also charged in a second indictment, stemming from the use of force and neck restraint of a 14-year-old boy in 2017.

That indictment alleges Chauvin deprived the boy of his right to be free of unreasonable force when he held him by the throat, hit him in the head with a flashlight and held his knee on the boy’s neck and upper back while he was prone, handcuffed, and not resisting. Information from the court gave no indication that Chauvin would be changing his plea in that case.