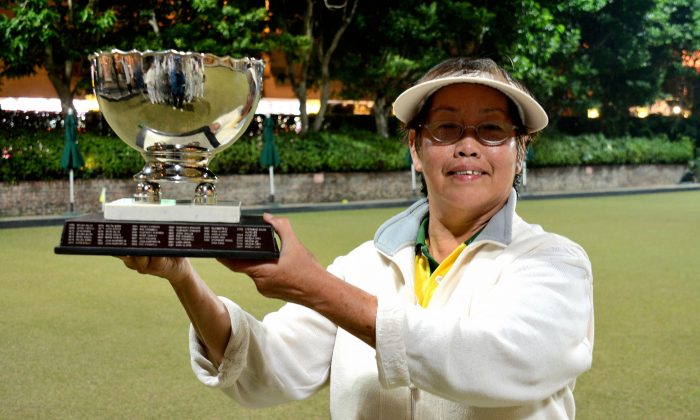 Chau won five games before reaching the final against her Hong Kong team team-mate Sanlia Wong from the Filipino Club. “I know Wong is a very good player and can play some highly aggressive shots,” said Chau, “So when I knew that she is my opponent in the final I started to consider what kind of tactic and which length of the game to play.”

The final was a tight affair as both players demonstrated high level of skill throughout with a lot of ends settled by the last bowl. Chau began the final with a toucher and took two shots from the first end.

The score was quickly opened up to 8:2,but Wong came back suddenly with five shots in two ends. “After winning these two ends she delivered a long head,” said Chau, “But I found that such distance even suit me better.”

Chau took advantage of the change of distance and took two shots from the following end and restore the lead to 10:7. From the 12th end onwards each player won an end alternatively, but it was Chau who cross the finishing line first, at the score of 17:12.

“This trophy means a lot to me,” said a jubilant Chau, “I won the first Knock-out Singles title 15 years ago and never successfully defended it before. Nowadays it is getting more difficult to win this trophy, not to mention defending it. So I just cannot describe how happy I am to win it two years in a row.”

Losing her first final at the Knock-out Singles, a disappointed Wong believed that it was her weight control that let her down: “In the last game the pace of the green was a bit different from the previous matches and my adjustment was not fine enough to cope with it. Maybe because I was tired, my concentration also dropped so the better performer won the game.”

The National Knock-out Singles has a tradition of playing all games within one day, representing a tough test on physical fitness, mental toughness and stamina of the competitors. This year the 83 competitors were played at five different venues throughout Hong Kong. The competition finished at 9:00 in the evening.