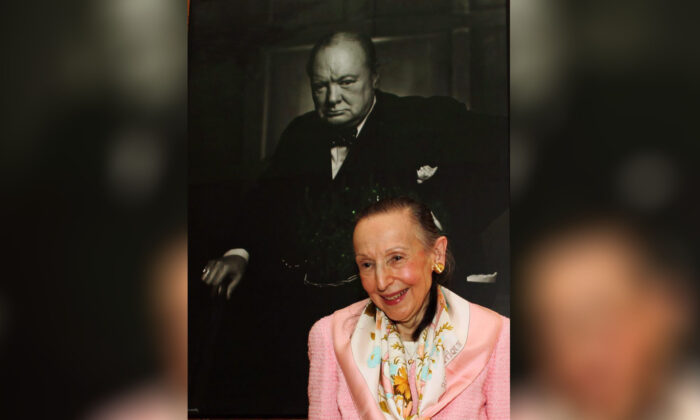 Estrellita Karsh wife of legenary photographer Yousuf Karsh stands in front of the iconic 1941 photograph of Winston Churchill taken by her husband in the Speaker of the House of Commons' chambers on July 14, 2009. (The Canadian Press/Fred Chartrand)
Canada

The Château Laurier says it’s been able to narrow down a time frame of when it believes a famous portrait of Sir Winston Churchill was stolen from its walls: sometime between Christmas Day last year and Jan. 6.

The hotel appealed for help from the public yesterday after a staff member noticed the photo wasn’t hung correctly over the weekend, and an inspection revealed that the portrait was a copy, not an original.

Photos taken by guests inside the hotel’s Reading Lounge confirm that the original was still hanging on Dec. 25, but a photo taken just 12 days later shows the fake.

The famous image was taken by Ottawa photographer Yousuf Karsh during Churchill’s wartime visit to the Canadian Parliament in December 1941.

Karsh lived at the Château Laurier and had a studio there for nearly 20 years, and a collection of 15 of his portraits are displayed in the lounge and in the Karsh Suite, all anchored to the walls.

The hotel’s general manager, Geneviève Dumas, says it would have required special tools to remove the frame, “so somebody knew what they were doing.”

“It was a professional for sure, because I walk by this frame every day and I show it to the guests and I could never have told you that it was a copy,” she said in an interview.

The Karsh Estate was able to confirm that the frame and signature on the portrait were not original, Dumas said.

Karsh recalled that the prime minister refused to put down his cigar to have his portrait taken after his speech to Parliament.

“Then I stepped toward him and, without premeditation, but ever so respectfully, I said, ‘Forgive me, sir,’ and plucked the cigar out of his mouth,” Karsh recalled, according to a write-up on the Estate of Yousuf Karsh website.

“By the time I got back to my camera, he looked so belligerent he could have devoured me. It was at that instant that I took the photograph.”

That image of Churchill is featured on the British five-pound note, and is often called “The Roaring Lion.”

The hotel is hoping to collect more photos that can help narrow down the window even further and to help investigators pinpoint how the portrait was taken, and by whom.

At the time of the theft, the hotel was relatively quiet because of restrictions due to the Omicron wave of COVID-19.

Dumas is appealing to guests who stayed at the Château Laurier or people who visited during those 12 days to send any photos they have of the Reading Lounge.

She’s also asking any buyers to be on the lookout.

“Did somebody try to sell you a picture of Winston Churchill? Well, maybe it was ours that disappeared.”