How Google Shifts Votes: A 'Go Vote' Reminder Is Not Always What You Think It Is
0
Share Now
FacebookTweetParlerEmail
Copy Link 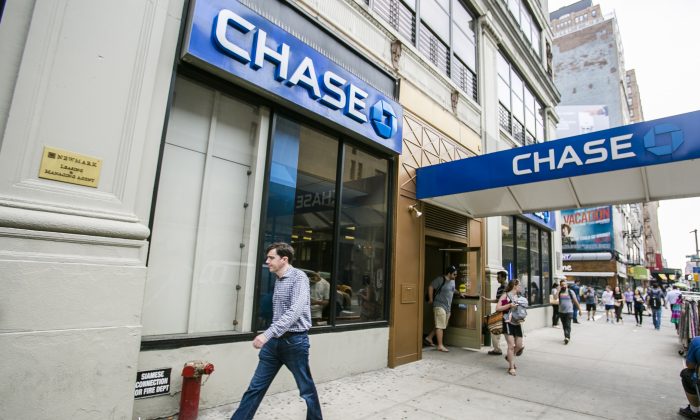 Chase bank in the Chelsea neighborhood of Manhattan on July 7, 2015. (Samira Bouaou/Epoch Times)
US News

Chase Bank denied services to the business of a conservative man one day after a journalist with the left-leaning online magazine Slate inquired about the business and linked it to “a hate group,” a leaked email shows.

On Jan. 31, Slate reporter April Glaser sent an email to several Chase representatives asking whether Chase was aware that an online store—1776.shop—linked to the right-wing group Proud Boys was using Chase as a payment processor, according to an email obtained by independent journalist and commentator Tim Pool.

“Is the usage of Chase Paymentech in support of such groups against Chase’s policy? On a deadline,” reads the email, which Chase confirmed as authentic, according to Pool in a June 7 video.

Slate spokeswoman Katie Rayford confirmed in a statement that Glaser reached out to “banks providing financial services for 1776.shop.”

”We stand by her reporting on this newsworthy topic,” she said.

On Feb. 1, Enrique Tarrio, the owner of the store, was notified that Chase decided to stop processing payments for his store. He then received a letter from Chase dated Feb. 4, which said his account would be shut down April 1.

A Chase spokeswoman said the email from Glaser and the subsequent termination of Tarrio’s account were completely unrelated and the timing was a coincidence.

“He has gotten an email from us and we have repeatedly talked to him with very clear reasons why. He knows why,” the spokeswoman, Patricia Wexler, said in an email. “If he agrees in writing that I can share that email with you, I’m happy to do so. But as it stands I’m not able to share it.”

In a previous email she said: “We have never, and would never, shut down any account due to political affiliation. If an account is shut down, there is a reason that has nothing to do with politics.”

The Epoch Times wasn’t able to reach Tarrio for a comment, but Project Veritas published on April 16 recordings in which Tarrio speaks to multiple Chase representatives, who struggle to explain to him why his account was closed.

He was told the account was “being closed by compliance” and that the matter should be brought up with the Chase “executive office.”

“[It’s] so mindboggling to me,” Chase business manager Marcel Smith Jr. told Tarrio. “I see nothing that indicates any reason why the account should be closed.”

Smith is heard as saying, “Nothing looks out of whack as far as the order in which you’ve been doing your transactions or handing your business.” Tarrio was a client of Chase for more than a decade.

Finally, a person from the executive office who identified herself as “Nora” told Tarrio that the bank observed “inconsistent information” about his online shop. His website redirected to his online shop and “Chase has no relationship with the 1776.shop … and therefore couldn’t conduct required due diligence.”

Tarrio pushed back, saying that the online shop went through a three-month certification process with Chase and that the bank had set up a checkout page for the online shop on its server. He said he had copies of emails he’d exchanged with a Chase certification team that listed links to the 1776.shop website.

He was told to give Chase his “dispute.” He did, but his account was still closed on April 1.

Biggs said the bank gave him his account back after a Chase representative told him the bank “got a lot of backlash from veteran groups out there.”

Chase previously declined to comment on the cases of Biggs and Markota.

Tarrio, who’s of Afro-Cuban ancestry, was in November elected as chairman of Proud Boys, a self-described drinking club that calls its members “Western chauvinists”—a term coined by its founder, comedian and former Fox contributor Gavin McInnes, to mean “a proud and unabashed proponent of Western Civilization.”

Some of its members go to right-wing rallies and events to “do free security for conservative speakers,” its website says. Some members have been involved in fights with members of violent left-wing groups such as Antifa.

There are video clips of Proud Boys in physical altercations with members of Antifa, but Tarrio said there are no examples of a Proud Boy breaking the group’s rule that members shouldn’t start fights.

“Get on YouTube, search it all day, you’ll never find a Proud Boy that goes and initiates something,” he said in a February interview with conservative YouTuber Sarah Corriher.

The Proud Boys’ social media accounts were largely shut down after several members were arrested in New York City in October for fighting with Antifa members. A video of the brawl suggests several Antifa members waited for a group of Proud Boys walking down a street and then provoked a fight by throwing a bottle at them.

Slate’s Rayford called the Proud Boys a “designated hate group,” without specifying who designated them as such. Glaser specified in her email that the designation came from the Southern Poverty Law Center, a group described by a former staffer as “in many respects, a highly profitable scam,” in a March 21 New Yorker story. Its co-founder, Morris Dees, was fired in March over unspecified misconduct, while the group “has been wrestling with complaints of workplace mistreatment of women and people of color,” the Los Angeles Times reported.

Oregon’s Clark County Sheriff’s Office said in an August 2018 memo that the FBI considers “Proud Boys to be an extremist group with ties to white nationalism.”

The group contests that description, highlighting the plethora of ethnic and racial backgrounds of its members, and its leaders’ repeated disavowals of white nationalism.

Oregon’s FBI office clarified in December that the bureau didn’t designate the group as extremist and suggested that the sheriff’s office misunderstood an FBI presentation that “tried to characterize the potential threat from individuals within that group,’’ Special Agent in Charge Renn Cannon told media, The Oregonian reported.

Glaser didn’t respond to a request for comment. Her article about Tarrio’s online shop, “The Swag Shop of the Far Right,” was published by Slate on Feb. 7.

US Military Says Its Troop Removal From Somalia Is Complete
0