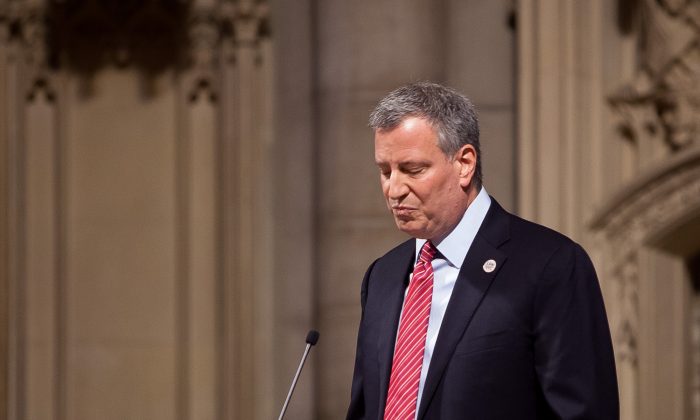 NEW YORK—Some charter school representatives are not convinced by Mayor Bill de Blasio’s recent conciliatory shift. Instead, they continue to look to Albany for free school space and more money.

The mayor gave an education policy speech Sunday at Riverside Church in West Harlem, and elaborated Monday on “The Brian Lehrer Show.” He spoke about finding common ground with charter schools, a change from talk about restricting them during his campaign and the first months of his administration.

Taking the focus off charter schools specifically, and talking about education in general, de Blasio told Lehrer: “I’m trying to take us back to the notion that there’s actually a common vision for serving every child, every neighborhood.”

Response from the charter school movement Monday was lukewarm at best.

The Success Academy, the biggest operator in the city with 22 charter schools, responded with “no comment” Monday.

Charter schools, which are governed by state law, go to the city only when applying for a co-location, which is sharing space in public school buildings.

De Blasio said during his campaign he would charge rent to charter schools that can afford it. He also said he would stop the co-locations until a “respectful and mindful” process of how to do them is devised.

“Once we get the co-location process right, there’s going to be an opportunity for charters to continue to have new chances to grow,” de Blasio said Monday.

Phillips said charter operators are afraid of whether the new co-location policy will treat them fairly. “That’s why we’re looking for help from Albany,” he said.

Gov. Andrew Cuomo will have the last word when he considers the budget, due on April 1.