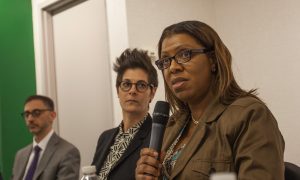 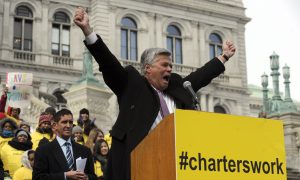 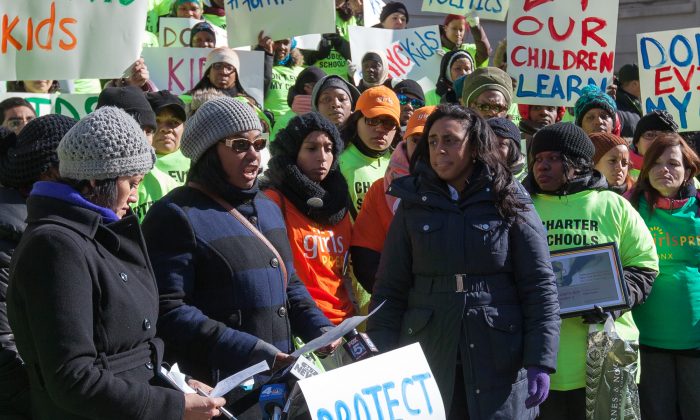 NEW YORK—A crowd was cheering as charter school parent Denisa Henry rallied for her daughter’s education on City Hall steps in February. Henry was one of dozens of parents out that day.

“Our families want more education options, not less,” she said with a thunderous voice. “Our elected officials should be helping parents like me.”

Charter schools receive public per-pupil funding, but are operated by private nonprofits. To enroll their children, parents have to apply and seats are assigned by lottery.

Be it the 10,000-strong rally in Albany two weeks ago, or the 6,000 who marched over the Brooklyn Bridge in October, big New York City charter school operators have incredible powers of mobilization.

While they have pockets deep enough to bus thousands of their students to Albany, there is a bigger, more important force behind their feats: the charter school parents who get involved in their children’s education.

“Our parents work extremely hard at Harlem Success,” said Eva Moskowitz, founder and chief executive officer of Success Academy Network, in an extensive interview for CUNY TV in 2007. “They have to read six books a week to their children.”

“I’ve never met an apathetic mom,” Moskowitz has said on a number of occasions. Her Success Academy, with 22 schools, is the biggest charter school operator in the city.

Yet it seems apathetic mothers do exist, or at least apathetic by Success Academy standards.

In many immigrant communities, parents value education, but struggle to navigate the education system and don’t understand what the system requires of them, according to Jane Quinn, vice president for community schools at the Children’s Aid Society, a nonprofit in youth development since 1853.

And there are some who miss the value of education altogether.

Daniel Polance is a high school student and a member of a leadership program with the Children’s Aid Society at a public school in Washington Heights.

During his after-school program he served as a role model for his younger schoolmates, helping them with homework, and in understanding their community.

When he first joined the program, he started with a class of sixth-graders, 90 percent of whom have spent less than a year in the country. He learned some parents wouldn’t even talk about school with their children.

“I’m afraid to say it, but it’s a lot of parents over there in the country that really just don’t care,” Polance said. “They send their kids out to work at an early age and they kind of already have that mentality when they come here.”

According to 2013 results, about 50 percent of New York City white and Asian students scored proficient on middle school standardized tests in math and English, while less than 20 percent of black and Latino students did.

Nationally, poverty rates for blacks and Hispanics are twice as high as for whites and Asians.

Big charter operators like Success Academy market themselves as expressways out of poverty. A majority of the children they serve are black and Hispanic, sometimes over 95 percent.

Yet over 80 percent of Success students scored proficient on state math tests, and almost 60 percent hit the mark on English tests. The city average is less then 30 percent on both tests.

Still, further research has shown there are significant differences among parents and children even within low-income communities.

According to a recent study published in the journal Educational Researcher, children with even worse academic outcomes had parents who struggled—in addition to poverty—with issues such as incarceration, depression, unemployment, lack of social support, and a lack of involvement in their children’s education.

“Poverty and race do not tell the whole story,” the study states.

When radio host Brian Lehrer asked Gov. Andrew Cuomo on March 10 whether charters attracting more engaged parents won’t make the surrounding schools more of a ghetto, Cuomo replied, “If you are worried about selection among charter schools, than deal with that.” He didn’t elaborate any further.

It may be that the charter school movement inherently attracts active parents.

“#ChartersWork because no one is there by default,” reads a Twitter post by Joe Gall, who identified himself as a father of twins and an architect.