Charter Schools in Own Space Worst Off 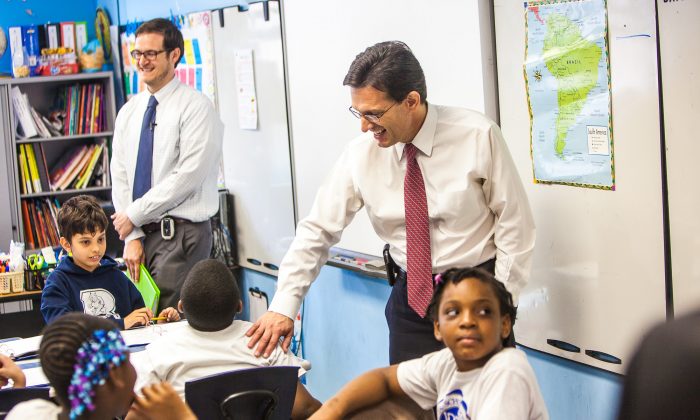 House Majority Leader Eric Cantor visits a classroom at the Bronx Charter School for Excellence in the Bronx, New York, on May 12, 2014. (Petr Svab/Epoch Times)
By Petr Svab

NEW YORK—Far away from rallying crowds and political debates, a large portion of New York City charter schools passes unnoticed. While they may benefit from not being singled out by charter critiques, charter supporters in the government have done very little for them, if anything at all.

Meanwhile, the House of Representatives passed a bill last week promising $50 million a year more for charters to expand and replicate.

But the new benefits are as good as nothing for the nearly 40 percent of the city’s charter schools that rent or own their own space.

Charter schools are operated privately, but funded per pupil with public money. The Independent Budget Office estimated in 2011 that charter schools operating in their own space receive about $3,000 less per pupil than those housed in public school buildings, when costs such as utilities and maintenance are taken into account. That doesn’t include rent or property taxes for the private space.

“That money could go into instruction,” said Vasthi Acosta, principal of Amber Charter School in Harlem. Amber, set up in 2002, is one of the oldest charters in the state. It has its own building, thanks to an initial investment from the Community Association of Progressive Dominicans, a community-based organization in Harlem and the Bronx.

The city has 76 charter schools in a similar situation, serving over 30,000 students. Most of them are smaller, without rich private backers.

The school started in rented space in 2004 and later was able to buy its own building, thanks to the previous owner’s generosity. “It’s worth five times more than what we purchased it for,” Reid explained. Now they’re buying another building with $24 million raised through a tax-exempt bond.

Yet the bill only offers grants for schools to expand or replicate. It doesn’t address schools that already struggle to make ends meet. It can help indirectly, as it says that states that give charter schools facility funding will have priority in the grant process.

“This is critically important for the 50 percent of New York’s charters in private space that were left out of the budget deal,” said Jessica Mokhiber, spokeswoman for the Northeastern Charter Schools Network, in an email response. The organization supports charters in New York and Connecticut.

The bill, that has yet to be discussed by the Senate, would take effect in 2015 at the earliest.