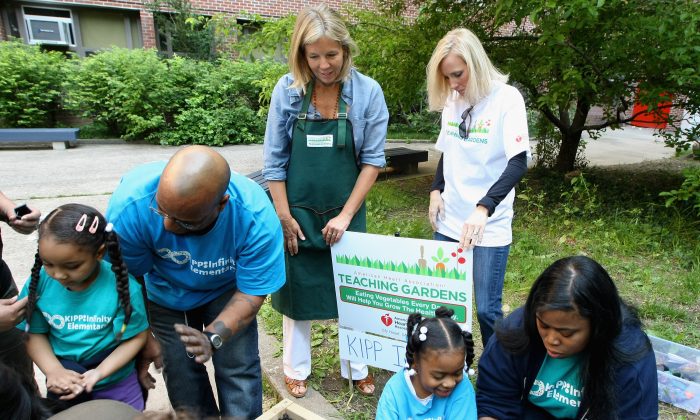 Noted health activist Kelly Meyer and the American Heart Association teamed up to unveil a new teaching garden for students at the KIPP Infinity Charter School on May 12, 2012, in Harlem, New York. (Neilson Barnard/Getty Images for AHA)
Opinion

Charter Schools and Their Enemies

Why undermine institutions that have benefited thousands of city students?

Among the many educational reforms that New York Mayor Michael Bloomberg adopted or expanded, charter schools—public schools that enjoy autonomy from many district restrictions, such as the salary schedule for teachers and the length of the school day—are perhaps the biggest success story. There were 14 charter schools in the city when Bloomberg took office. Today, 159 of them educate more than 48,000 students.

Though charters operate in each of the five boroughs, they’re most heavily concentrated in areas with underperforming traditional public schools, such as Harlem and the South Bronx. Despite their rapid growth, the demand for charter school seats continues to exceed the supply. According to the New York City Charter School Center, nearly 53,000 students are currently on waiting lists.

Charter schools vary considerably in quality. Some are fabulous, some are good, a few are no better than the nearby traditional public schools from which they draw students, and a few may be worse. But empirical research leaves no doubt that the average student who attends a Gotham charter is much better off because of it.

A study by economist Caroline Hoxby using a gold-standard random-assignment methodology found that students in the city’s charter schools made substantially better academic progress than they would have in a traditional public school. Margaret Raymond, the director of Stanford University’s Center for Research on Education Outcomes, conducted a separate analysis and confirmed Hoxby’s study. (It’s notable that other research of Raymond’s found far more mixed results in other states’ charters.)

Some critics contend that charter schools harm conventional public schools by robbing them of resources and their best students. But the success of charter students doesn’t come at the expense of children who remain in the traditional schools, as my own research demonstrates. Was there a relationship, I wondered, between the percentage of students that a traditional New York City public school lost to the charter sector one year and that school’s academic performance the following year?

Using data on individual students over time, I found that the more students a public school lost to charters, the better its remaining students performed—probably because the school now faced competition from charters for enrollment. Though that finding contradicts the narrative, propagated by the teachers’ unions, that charters threaten traditional public schools, it’s consistent with a wide body of research evaluating school-choice programs across the nation.

In a perfect world, charter schools wouldn’t be a political issue. But their autonomy threatens the teachers’ unions and others who benefit from the restrictions that govern the traditional public school sector. These interests have lost several battles in their war on charters. In 2010, for instance, Albany lawmakers substantially increased the cap on the number of charter schools that can exist in the state, in part because of vocal support from Mayor Bloomberg.

The changing of the guard in the New York mayor’s office offers the anti-charter forces a new opportunity, however. There’s little danger that the next mayor could force charters out of Gotham any time soon; the schools have gained powerful political constituencies among parents seeking educational alternatives, and they’re backed by well-financed groups and individuals across the city and the nation. But a new administration hostile to charters could impede their progress and diminish their promise. Alternatively, a supportive mayor could expand the model and help children across the city.

Perhaps the most important charter-related policy that the new mayor will confront involves physical space. Charter schools across the nation often have trouble finding an adequate location, but the challenge is particularly difficult in cramped New York. With the backing of the Bloomberg administration, most of the city’s charters run virtually rent-free in unused space within buildings that also house conventional public schools.

For visitors, these co-located environments can be startling: on one floor, overwhelmed teachers in the traditional school might be showing videos to rowdy students, while on another, engaged charter students participate actively in dynamic lessons.

Colocations are a fiscal necessity for New York’s charters, since they get no capital funds from the state. And the arrangement is entirely reasonable; after all, charter schools are still public schools. But parents in the host schools vehemently fight every new colocation, and the teachers’ unions and various nonprofit groups deploy angry protesters on their behalf. The extent to which a new administration supports colocations will thus have an enormous influence on the future success of New York’s charters.

The new mayor should also persuade state legislators to reduce restrictions on who can teach in charters. Charters already have more autonomy here than traditional public schools do: since they aren’t restricted by the city’s collective bargaining agreement, they can remove ineffective teachers without the extensive due-process requirements that the traditional schools’ administrators face.

But by law, charters still can’t employ many uncertified teachers, which often inhibits them from hiring qualified candidates. At first glance, that restriction might seem sensible. But empirical research provides no meaningful evidence that certified teachers are more effective in the classroom than uncertified ones. So the law stops schools from hiring promising candidates who haven’t jumped through the mandated hoops.

A former engineer may or may not turn out to be an effective high school math teacher—but it’s preposterous that she wouldn’t be qualified to teach in a charter school without first obtaining an otherwise useless education certificate. The new mayor should push Albany to allow charter schools to staff their schools with as many uncertified teachers as they please.

New York City’s charter schools provide a valuable lifeline to many students who otherwise would find themselves stuck in terrible public schools. The rapid expansion of charters over the last decade is one of Bloomberg’s most important legacies; with luck, the city’s next mayor will understand that.

Marcus A. Winters is a senior fellow at the Manhattan Institute, an assistant professor in the College of Education at the University of Colorado at Colorado Springs, and the author of Teachers Matter. This article was adapted from City Journal’s special issue, “After Bloomberg: An Agenda for New York.”

Marcus A. Winters
Follow
Marcus A. Winters is a senior fellow at the Manhattan Institute, an assistant professor in the College of Education at the University of Colorado at Colorado Springs, and the author of Teachers Matter.
TOP NEWS