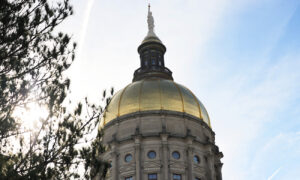 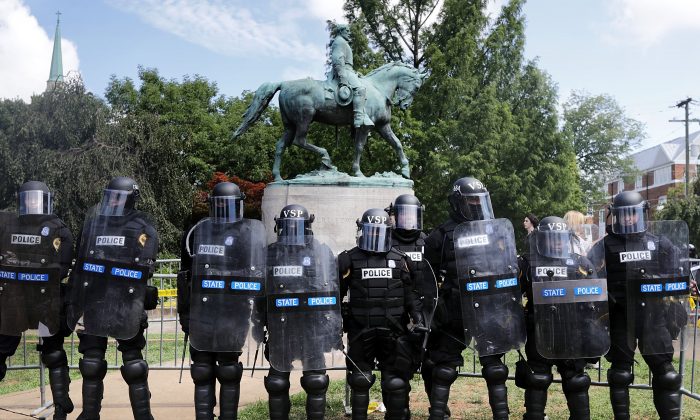 Virginia State Police in riot gear stand in front of the statue of General Robert E. Lee before forcing white nationalists, neo-Nazis and members of the "alt-right" out of Emancipation Park after the "Unite the Right" rally was declared an unlawful gathering Aug. 12, 2017 in Charlottesville, Virginia. (Chip Somodevilla/Getty Images)
US

After an Aug. 12 rally in Charlottesville, Virginia, met with protests and turned violent, leaving one dead and dozens injured, police have been criticized for not managing to separate the rally participants from the protesters.

Hundreds attended the Unite the Right rally with a stated purpose of protesting the potential removal of the statue of Robert E. Lee, a Confederate general, from a park. Most of the attendees identified as some denomination of alt-right (ranging from libertarians to white nationalists), some were fascists.

The rally was confronted by a massive crowd of protesters, which included large contingents of Antifa and Black Lives Matter followers.

The rally was supposed to start at noon, but the participants and the protesters started to gather hours in advance. What seemed as dozens of people on boths sides came equipped with an assortment of sticks, pepper sprays, and shields.

There was also a militia group in body armor, and armed with rifles. Their stated intent was to stay neutral and break up fights. According to multiple journalists at the scene, that was what they did.

The center of the park (formerly Robert Lee Park, now Emancipation Park) was fenced off by metal barriers.

By 11 a.m., the fenced-off area was filled with the rally attendees. By that time, small bouts of violence had erupted as the rally attendants passed by the crowds of protesters. The clashes seemed most intense at the park entrances.

Based on a livestream account of the event, it seemed tear gas canisters had been thrown by the protesters and then thrown back by the rally attendants.

Meanwhile, the police were standing by, showing no initiative to break up the fights or form a barrier between the two groups.

A handful of the militia members were seen forming a semblance of a human barrier with some success at separating the groups.

“The policing on Saturday was not effective in preventing violence,” American Civil Liberties Union of Virginia stated in a Aug. 14 release. “In fact, law enforcement was standing passively by, seeming to be waiting for violence to take place, so that they would have grounds to declare an emergency, declare an ‘unlawful assembly’ and clear the area.”

At 11:35 a.m., the city declared the rally an unlawful assembly and shortly after police in riot gear moved in to clear out the park.

This, however, was a risky move.

“This is problematic because the park is kind of surrounded and if all these folks on the inside have to leave they’re going to go right smack into the middle of the counterprotesters,” commented WitlessX, an independent journalist on-scene live-streaming the event.

Several rally attendees pressed themselves against the police shields and attempted to push back. They were pushed out of the park nonetheless.

Yet most rally attendees quickly left the park and dispersed. Virginia State Police’s Twitter account, which reported multiple instances of clashes and injuries that day, hasn’t posted any reports of violence after the park was cleared. That is, until the most violent moment of the day came.

Around 1:40 p.m., 20-year-old James Alex Fields Jr. from Ohio rammed his car into a crowd of protesters. He was charged with second-degree murder for killing Heather Heyer, a 32-year-old paralegal, while injuring scores more.

Charlottesville Vice Mayor Wes Bellamy defended the police. “I’m not in the business of throwing our police department under the bus, because they’re doing the best job they can, ” said Bellamy, according to ProPublica. “I don’t think the police officers were just twiddling their thumbs.”