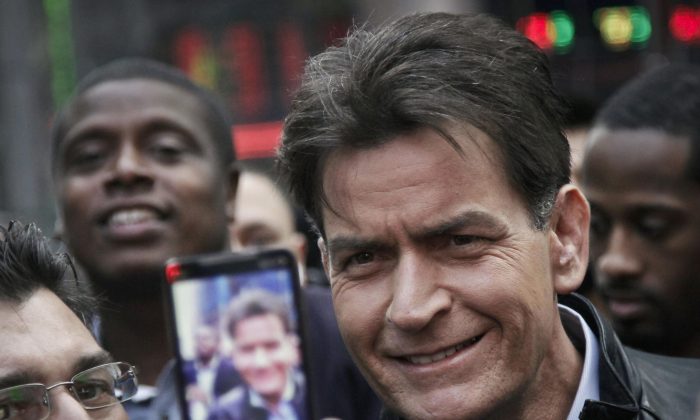 Actor Charlie Sheen is mobbed for autographs and photos as he makes his way through Times Square in New York on Jan. 14, 2013. In an interview Tuesday, Nov. 17, 2015, on NBC's "Today," Sheen said he tested positive for the virus that causes AIDS. (AP Photo/Bebeto Matthews)
Entertainment

Charlie Sheen on HIV: ‘My partying days are behind me, my philanthropic days are ahead’

NEW YORK—Charlie Sheen said his bad-boy days are over and, with Tuesday’s declaration that he’s HIV-positive, he aims to become an inspiration to others.

“My partying days are behind me,” Sheen said in a letter posted online. “My philanthropic days are ahead of me.”

The manifesto was released as the former “Two and a Half Men” star appeared on NBC’s “Today” to say he tested positive for the virus that causes AIDS about four years ago, but that, thanks to a rigorous drug regimen, he’s healthy.

When asked by “Today” co-host Matt Lauer if he had transmitted the disease to others, Sheen declared, “Impossible. Impossible,” and insisted he had informed every sexual partner of his condition beforehand. He told Lauer he has had unprotected sex with two partners, both of whom knew ahead of time, adding, with no clarification, “They were under the care of my doctor.”

That claim was disputed by Bree Olson, who was living with Sheen in 2011 as one of his two “goddesses.”

“He never said anything to me,” Olson said on Howard Stern’s SiriusXM radio show Tuesday.

She said she learned of Sheen’s condition only in the past few days, prompting her to be tested. She told Stern the results were negative.

Asked by Lauer if he expected “a barrage of lawsuits” from past sexual partners alleging he infected them, he said wanly, “I’m sure that’s next.”

But in California, where Sheen resides, a person can be charged with a felony only if they are aware they are HIV-positive and engage in unprotected sex with another person with the specific intent of exposing them to the disease.

With his public pronouncements, Sheen said he hoped to reduce the stigma and shame still felt by others diagnosed with HIV, as well as by those reluctant to be tested. He voiced hope that “others may come forward and say, ‘Thanks, Charlie, for kicking the door open.'”

While some may have dismissed what Sheen said as the latest rantings of a reckless grandstander, others were calling him a champion.

“Today, he’s a hero of mine,” said Peter Staley, a long-time AIDS activist who is HIV-positive. Watching Sheen’s interview, “I saw someone who has made a major leap forward and is on a new path that will hopefully end up helping a lot of people.”

Sheen said one reason for going public with his condition was to put a stop to shakedowns from prostitutes and others. He said one prostitute took a photo of the HIV-related drugs in his medicine cabinet and threatened to sell that photo to the tabloids.

He said he had paid “enough to bring it into the millions”—perhaps as much as $10 million—to buy their silence.

“Are you still paying these people?” Lauer asked him.

“Not after today I’m not,” said Sheen, who during his appearance appeared jumpy and spoke in stuttering bursts.

He did not address when, and by whom, he may have been infected.

For part of the interview, Sheen was joined by his physician, Dr. Robert Huizenga, who said the HIV level in Sheen’s blood is “undetectable” and that he does not have AIDS.

“He is absolutely healthy,” said Huizenga.

Sheen said in the past that he was “so depressed by the condition I was in that I was doing a lot of drugs, I was drinking way too much.” He said he currently is not abusing drugs, though he allowed that he is “still drinking a little bit.”

The disclosure was the latest chapter in Sheen’s headline-seizing history. In recent years, drug and alcohol abuse led to his being kicked off CBS’ hit sitcom “Two and a Half Men” in 2011, where he played a womanizing bachelor, after a meltdown that included calling the show’s producer “a contaminated little maggot.”

His escapades also included the revelation that he spent more than $50,000 as a client of “Hollywood Madam” Heidi Fleiss’ prostitution ring.

Sheen has been married three times, the first time to model Donna Peele in the 1990s.

He and actress Denise Richards were married from 2002 to 2006 and have two daughters. Sheen and real estate investor Brooke Mueller wed in 2008 and divorced in 2011; they have two sons.

“Brooke can confirm that she and the boys are not HIV positive,” Steve Honig, a spokesperson for Mueller, said in an email.