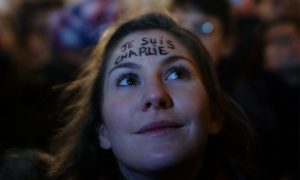 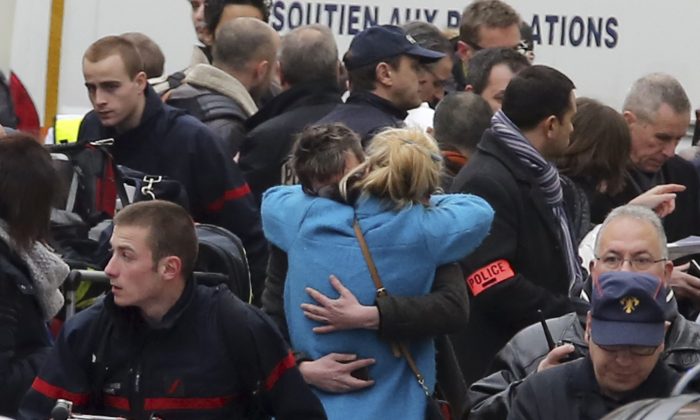 One of three suspects in the attack on French magazine Charlie Hebdo, 18-year-old Hamyd Mourad, surrendered to police, after a daylong manhunt. Two more suspects, brothers Cherif and Said Kouachi, are still at large.

U.S. officials initially told NBC that two suspects were brought into custody while the other was killed. The officials said later, however, that those accounts were unconfirmed.

The trio are suspected of being the three gunmen who stormed into the magazine’s offices in Paris on Wednesday, killing 12 and wounding almost a dozen others.

The brothers are in their early 30s, French nationals, and reside in Paris. Mourad is reportedly homeless and 18 years old. Reuters says he may be from Reims, and some reports indicated that the men were heading that way.

The Liberation and Guardian newspapers also reported that the suspects were arrested.

Not much has come out about the suspects, though it appears that one, Cherif, was arrested as a student back in 2005 when he tried to leave for Syria to fight against U.S.-led forces there.

He “knowingly joined the radical Islamists and were determined to fight in their ranks … and willing to die,” the judge said at the time. He and another student were setenced to three years in prison, but got 18 months of the sentence suspended. But his lawyer insisted he was not religious, engaging in activities such as drinking alcohol.

An official told the Associated Press that the three men have been linked to a Yemeni terrorist network.

The gunmen, after killing cartoonists and others, fled in a vehicle from the scene. Police later found the vehicle, but said the suspects had abandoned it only to acquire a second vehicle, which they sped away in.

The suspects were dressed in all black and were wearing masks.

Terrorism experts who saw video footage of the attack said that the gunmen appeared to act like trained Islamist commandos. The gunmen had ammunition belts and carried Kalashnikov assault rifles.

“I was struck not only by their cold-blooded calm but also the professional way that they made their getaway, taking the time to finish off a wounded policeman,” Jean-Louis Bruguiere, a former top anti-terrorism investigative magistrate, told Reuters.

The magazine’s offices had been under police protection since 2011 when the magazine was attacked after publishing a cartoon of the Prophet Muhammad.

But the attackers got in anyway, indicating the level of planning they went through.

“Clearly there was a reconnaissance operation beforehand,” Anne Giudicelli, founder of the TERR(o)RISC security consultancy, told Reuters. “They found a chink in the security arrangement and chose a method guaranteeing success.”

“This is an act of exceptional barbarism that has just happened here, in Paris, against a newspaper. Journalists and security personnel were cowardly assassinated,” French President Francois Hollande said at the scene.

Police are vigorously tracking the suspects.

“We will track them down as long as it takes so that they can be brought to justice,” Hollande said. “Today, France is experiencing a tremendous shock. This is a terrorist attack, there is no doubt about it. It targeted the newspaper that had been threatened several times and it was under protection.”

The attacks came after the magazine published cartoons and stories that were perceived by some as anti-Islamic. The magazine was attacked in the past for publishing cartoons that made fun of the Prophet Muhammad, including a firebombing in 2011.