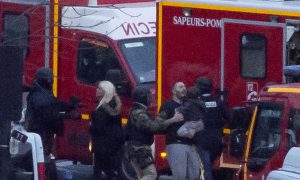 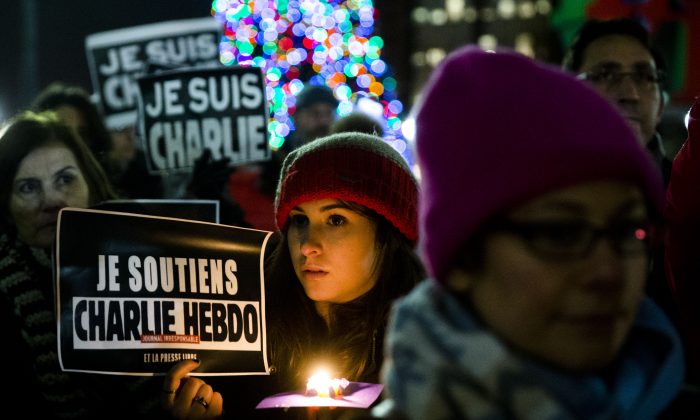 The hunt for the two killers who attacked the offices of Charlie Hebdo is over, after a three-day chase and a standoff at a warehouse outside Paris. The two suspects were killed, and the hostage they took was freed.

At the same time as the warehouse was stormed, the police also moved to end a hostage situation at a Kosher supermarket at Porte de Vincennes in Paris. That operation ended with conflicting reports of casualties, but the hostage-taker was killed.

French security services and political leaders have been keen to stress the country remains in a state of high alert and the hunt for other potential accomplices goes on. However, it does appear a phase in this extraordinary and deadly terror attack is over. Now, anti-terror experts and police will begin to pore over images and video of the events and try to figure out exactly what happened.

The images captured from the attack at the Charlie Hebdo offices in Paris, of two masked gunmen on the attack gave the impression of disciplined killers, clad in black and showing no mercy.

In reality, the attackers first went to the wrong building and, when they found right one, had to force someone to let them in with an entry code. They escaped, but with no safe house established, and they appeared to be without a plan as to what to do next. They were identified at a service station the following day, still driving the same car they stole in the immediate wake of the Paris attack.

Despite these amateurish slip-ups, it is still not clear if the events in Paris this week were entirely homegrown attacks or if these attackers were trained abroad. US and French intelligence services suspect one of the brothers of having trained with al-Qaeda in Yemen, though their proximity to the organisation is not yet known. Al-Qaeda has, from there, made threats against Europe.

Al-Qaeda was established to provide support to a network of more than 20 organisations operating in the Islamic world. These were united by common experience in the war against the USSR in Afghanistan and by a desire to return to a more fundamental version of Islam. At present it consists of a number of affiliated regional groups and indirectly affiliated organisations.

One of the key components is al-Qaeda in the Islamic Maghreb, which attacked in Mali and against which French troops were deployed. Others include al-Qaeda in Somalia, al-Qaeda in the Arabian peninsula, which the Paris attackers claimed to be representing; al-Qaeda in Syria – which is a different organisation to Islamic state – and al-Qaeda in the Indian sub-continent.

This downward spiral into ultra-violence has been seen before. It is not confined to Islamic extremism. During the 1970s, anarchists, Maoists and Trotskyists committed acts of terror in Europe.

There was a generational change in what began as an urban guerrilla movement and turned into full-blown terrorism. And that change can teach us about our very modern problem.

The first generation was led by relatively experienced individuals, with a long background in political activity. They began by using violence against symbolic targets and differentiated between the “enemy” and the public as a whole. Symbolic buildings were their main targets.

The second generation saw violence against politicians, policemen and soldiers as acceptable. The third hoisted high the banner of “if you are not part of the solution you are part of the problem”, a slogan which justified civilian casualties. Finally a fourth generation emerged which concentrated on attacking “soft” civilian targets.

At the time this was considered a logical progression. As the older leadership was arrested or killed, leadership passed to individuals with fewer scruples and no real interest in building up public support.

Provoking the authorities into overreaction became a strategy. As potential targets were hardened and made more risky to attack, militants turned to softer targets. There were even training programes in Palestine and other post-colonial countries.

We may be able to learn more from a re-examination of what happened to revolutionary groups in the late 1960s and early 1970s as we try to understand and stop the generation of extremists that appear to be responsible for the shocking events in France.

Back then, there was a bewildering array of ideologies and groups. Anarchism, Maoism, several kinds of Trotskyism and orthodox communism existed on the revolutionary Left. We had different strategies and tactics and organisational splits because of them. We had broader campaigns within which all of these groups operated in different ways.

Now, below the leadership of al-Qaeda and Islamic State is a much looser set of associations, following individual local charismatic leaders, who will go their own way when it suits them. History tells us that extremist groups can and do splinter.

The whole network is more fragile than it looks, particularly in these dark times. Unforeseen events could rapidly produce internal conflicts over personalities, the tactic of indiscriminate violence, or even the teachings of Islam, leading to disillusionment on the part of existing and potential recruits from Europe. Investigators in France will now call upon intelligence regarding the details of and differences between such groups as they seek to understand what has taken place in France – and to stop it happening again.

Bill Tupman is an honorary research fellow at the University of Exeter. He researches transnational crime, terrorism, and the process of creating a supranational police response to these phenomena.