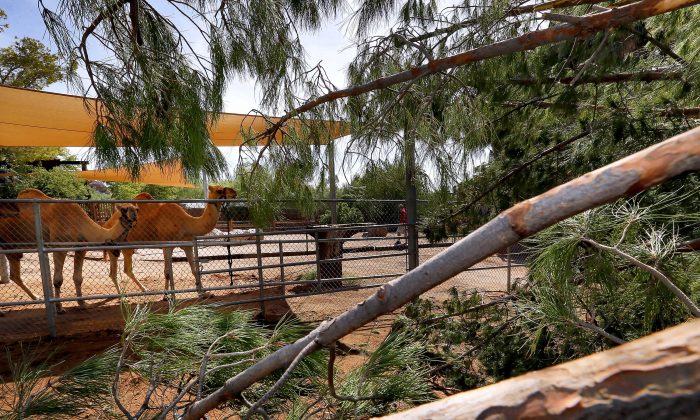 Dromedary camels are tied up, Tuesday, Sept. 1, 201 at the Phoenix Zoo, away from a large pine tree that fell into their exhibit late Monday evening. Monsoon storms hit the Phoenix area Monday night and knocked out power to thousands, delayed air travel, and stranded motorists in flash floods. The Phoenix Zoo had to close for the day to remove storm-damaged and fallen trees throughout the park. (AP Photo/Matt York)
US

CHARLESTON, S.C.—Officials from the National Weather Service planned to confirm Friday if a tornado hit along the South Carolina coast after an overnight storm damaged 10 homes, blowing out windows, sending trees onto roofs and flipping over a trailer. There were no immediate reports of injuries.

The storm struck around 1 a.m. Friday on Johns Island southwest of downtown Charleston.

Numerous streets were closed because of downed trees and power lines, said James Ghi, a battalion chief with the St. John’s Fire District.

“Crews are methodically going through the area looking to help people,” Ghi said, but had found no one who had been hurt. “Obviously, we’re really thankful.”

The National Weather Service posted a tornado warning in the area early Friday. Meteorologist Douglas Berry said radar and damage reports indicate it was probably a tornado that struck the area.

The weather service planned to send a survey crew to the scene Friday to check on damage and confirm if the storm was a tornado. The American Red Cross was on hand to help those families displaced by the storm.

South Carolina Electric & Gas reported that about 200 homes were without service in Charleston County early Friday at the height of the storm. By daybreak, 85 customers on Johns Island were without power and the company expected to have all power restored by midmorning.

A flash flood watch was in effect until 8 a.m. Friday for the Charleston area.

“We are expecting the streets to flood with the high tide coming in, Ghi said.