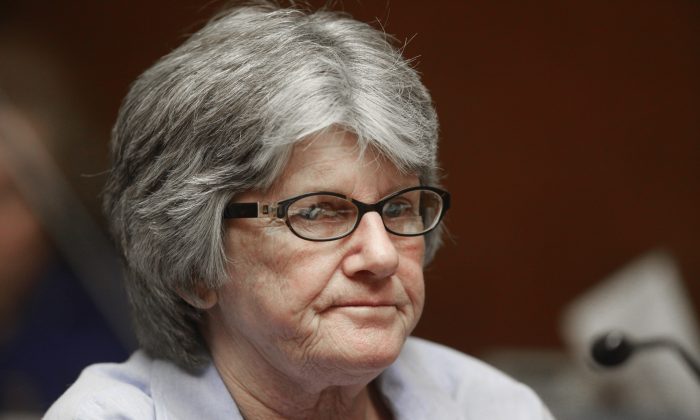 Former Manson family member and convicted murderer Patricia Krenwinkel listens to the ruling denying her parole, at a hearing at the California Institution for Women in Corona, Calif., Thursday, Jan. 20, 2011. (AP Photo/Reed Saxon)
Crime and Incidents

SACRAMENTO, Calif.—Patricia Krenwinkel, once a devout follower of cult killer Charles Manson and now the longest-serving female inmate in California, appeared again Thursday before a parole board — 47 years after she helped kill pregnant actress Sharon Tate and six other people.

Krenwinkel, 69, has been denied parole 13 times since her conviction in the 1969 slayings.

She acknowledged during her trial that she chased down and repeatedly stabbed Abigail Ann Folger, the 26-year-old heiress of a coffee fortune, at Tate’s home and helped kill grocer Leno LaBianca and his wife, Rosemary, the following night.

Krenwinkel’s attorney, Keith Wattley, successfully petitioned the state to hold the hearing a year early at the California Institution for Women, about 40 miles east of Los Angeles, where Krenwinkel is imprisoned.

“Ms. Krenwinkel is fully aware of the difficulty she faces,” Wattley told The Associated Press in an email. “But California law officially recognizes a person’s capacity to change and to address the factors that contributed to their previous behavior so that they can safely be paroled.”

Krenwinkel contended at her previous parole hearing in 2011 that she is a changed woman. She has a clean disciplinary record, earned a bachelor’s degree behind bars, taught illiterate inmates to read and trained service dogs for disabled people.

“She was a very prolific killer,” Debra Tate said recently. “They may behave well in a controlled environment, but we cannot trust that, given the pressures of life, that they will be able to remain straight” outside prison.

Krenwinkel was a 19-year-old secretary when she met Manson at a party. She testified at her previous parole hearing that she left everything behind three days later to pursue what she believed was a budding romance with him.

She wept and apologized, saying she became a “monster” after she met Manson.

Prosecutors say the slayings were an attempt to ignite a race war after which Manson and his followers would rise from the rubble to rule the world.

Krenwinkel was initially sentenced to death, but the California Supreme Court invalidated the death penalty in 1972. If the parole panel recommends release, Gov. Jerry Brown could still block it.

Anthony DiMaria, the nephew of victim Thomas Jay Sebring, said Krenwinkel’s age and long stint in prison should have no bearing on the parole board decision.

DiMaria noted that Krenwinkel has lived a long time but denied that opportunity to her victims.