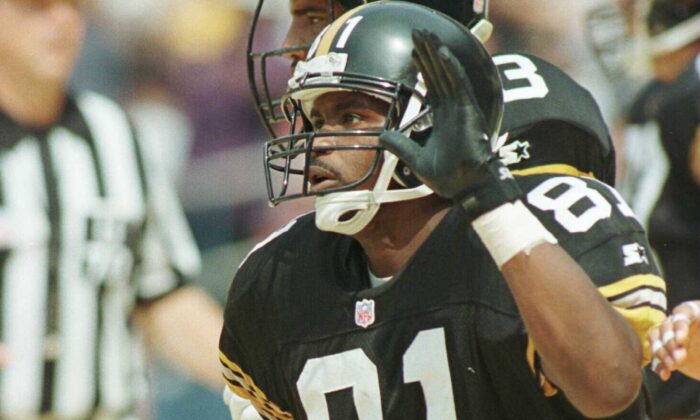 Charles Johnson #81 of the Pittsburgh Steelers celebrates scoring a touchdown in the second quarter of their game against the Baltimore Ravens at Three Rivers Stadium in Pittsburgh, Pa., on Sept. 8, 1996. (Jonathan Daniel/Allsport)
NFL

The cause of his death was unknown as of Wednesday afternoon.

Johnson played nine NFL seasons for the Pittsburgh Steelers, Philadelphia Eagles, Buffalo Bills and the New England Patriots in 2001 when they won the Super Bowl.

In his younger years, he played college football for the Colorado Buffaloes.

“We offer our deepest condolences to the family and friends of our former WR, and Buff great, Charles E. Johnson,” Colorado Buffaloes Football wrote on Twitter.

We offer our deepest condolences to the family and friends of our former WR, and Buff great, Charles E. Johnson.

Johnson finished his career with 354 catches for 4,606 yards and 24 touchdowns.

Tributes are pouring in for the late player from colleagues, friends, and family.