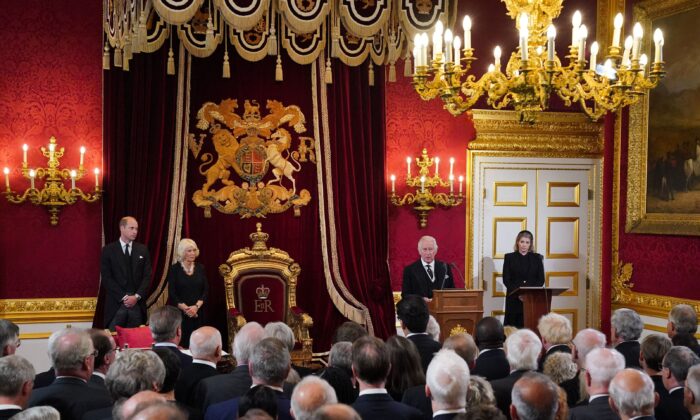 The 73-year-old new monarch automatically became King when his mother, Queen Elizabeth II, died on Thursday afternoon, although it’s tradition for the Accession Council to convene, usually within 24 hours of a monarch’s death, to formally proclaim his or her successor.

The Accession Council, mainly made up of more than 200 members of the Privy Council, a group of advisers including past and present senior politicians, judges, bishops, and some senior royal family members, were present at St. Jame’s Palace to hear the accession proclamation.

The Clerk of Council read out the proclamation, proclaiming Charles III, who wasn’t present at this first part of the ceremony, King of the United Kingdom of Great Britain and Northern Ireland and of his other realms and territories, head of the Commonwealth, and Defender of the Faith.

In the second part of the ceremony, privy councillors proceeded to the throne room, where the new king made his declaration.

Charles said he will strive to follow the late queen’s example “in upholding constitutional government and to seek the peace, harmony, and prosperity of the peoples of these Islands and of the Commonwealth Realms and Territories throughout the world.”

He also took an oath to uphold the security of the Church of Scotland.

In his first televised speech as King on Sept. 9, Charles recalled his mother’s pledge made on her 21st birthday to devote her whole life to the service of the Commonwealth, vowing to uphold the constitutional principles throughout his remaining life, and signaled that he will take a step back from being involved in “the charities and issues” about which he “care[s] so deeply.”

During the ceremony on Sept. 10, the king also approved as one of his first acts that the day of the queen’s funeral—expected to be held on Sept. 19 but the date isn’t yet confirmed—will be a bank holiday.

Following the declaration, the accession proclamation was read out in public for the first time from the balcony of St. James Palace, and flags were flown at full staff and remained so for a day before returning to half-staff in mourning for the queen.

The accession council is separate from the coronation, in which the king will be crowned by the Archbishop of Canterbury.

In the case of Queen Elizabeth II, her coronation ceremony took place on June 2, 1953, more than a year after she became queen.