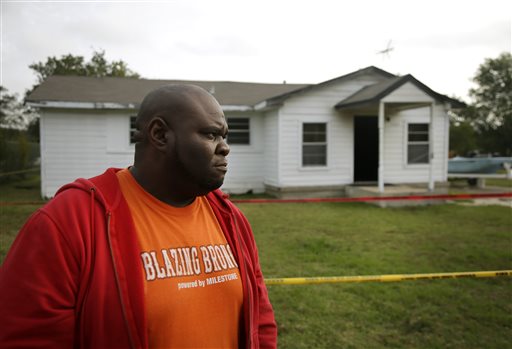 Terrence Walker of Forney, Texas, the brother of 36-year-old Charles Everett Brownlow Jr., stands in front of their mother, Mary Brownlow's house as he answers a reporters question, Tuesday, Oct. 29, 2013, in Terrell, Texas. Police arrested Charles Everett Brownlow Jr. early Tuesday who is suspected of killing five people, including his mother, during a series of attacks hours earlier in his rural North Texas community. Mary Brownlow,was found dead Monday evening in the house where a fire was set and very clearly an arson, according to authorities. (AP Photo/Tony Gutierrez)
US

Charles Everett Brownlow Jr. Arrested in Murder of 5, Including His Mother, in Terrell, TX

Charles Everett Brownlow Jr. has been arrested after five people were killed in Terrell, Texas on Monday–including his mother and aunt.

The suspect, a 36-year-old resident of Terrell, was captured after stealing and wrecking a car then running into some woods, police Chief Jody Lay said.

Lay did not specify any charges against the suspect or speculate on a motive in the killings in Terrell, a city of about 16,000 people located some 30 miles east of Dallas.

“We’re all in a state of shock,” Lay said. “You have a tendency to think, ‘How can that happen here?’ This is a country community, a rural community, people are real close. This is going to be, it’s going to have a really big impact on us.”

The victims were identified as the victims as Brownlow’s mother, Mary Brownlow, 61; his aunt, Belinda Walker, 55; Jason Michael Wooden, 33; Kelleye Lynnette Sluder, 30; and Luis Gerardo Leal-Carrillo, 22. Lay said that Brownlow “hung out occasionally” with Wooden and Sluder. It wasn’t immediately clear whether he knew Leal-Carrillo.

The attacks began around 5 p.m. at the home of Belinda and Robert Walker. He said he arrived home to find his wife lying on the floor of his 15-year-old son’s room.

“I just went in calling my wife’s name and she never did answer,” Robert Walker said.

About 30 minutes later, fire units responded to a blaze at Mary Brownlow’s house a few blocks away. When the fire was extinguished, crews found her body in the smoldering wreckage. Lay said it was clearly arson.

At about 10:30 p.m., police responded to a report of a shooting at another home and found Wooden and Sluder dead. A 3-year-old boy in the home was unharmed and was released to relatives.

Tesla Savell, who lives across the street from the home where the two bodies were found, said worried friends sent her text messages as the slayings continued Monday night.

“It hits close to home,” Savell said of the killings of the couple, whom she described as a “sweet family.”

By this point, authorities had a description of the stolen vehicle Charles Brownlow was believed to be driving. An off-duty police officer saw that vehicle parked outside a convenience store at 10:37 p.m. As the officer called in the sighting, the suspect ran from the store, jumped in the vehicle and sped away, Lay said.

A high-speed police chase ensued. Charles Brownlow wrecked the car and took off on foot into thick woods, dropping a holster or handgun on the way, the chief said.

The suspect was captured around 1:30 a.m. Tuesday after he wrecked the stolen vehicle and dashed into some woods, near a creek near his home on Stallings Street. A law enforcement helicopter using infrared cameras helped uncover the man.

Brownlow has a criminal history dating back to 1996. He was living with his mother.