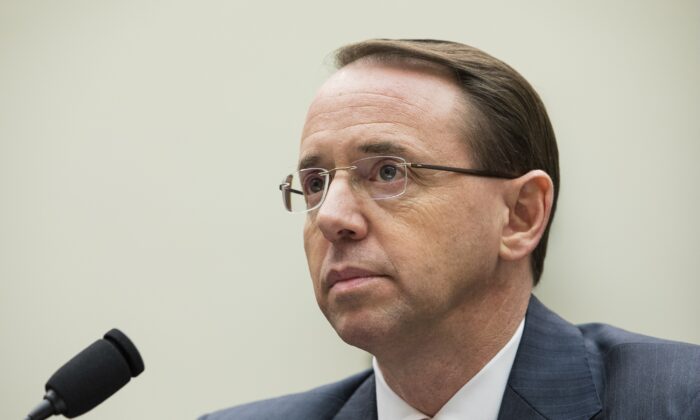 The revelation that Democratic operative Charles Dolan was one of the sources for the dossier compiled by former British spy Christopher Steele shows that the FBI and Department of Justice (DOJ) withheld information from congressional investigators, Kash Patel said on Nov. 12.

“I’m the lead Russia guy, and I had never heard of this guy,” said Patel, a former investigator for the House Intelligence Committee. “It means, to me, the FBI, DOJ under Rod Rosenstein withheld information that was critical to the Russiagate investigation that we were running in 2017, 2018. And who knows what else they’ve left out?”

Igor Danchenko, Steele’s primary sub-source, was recently charged with making false statements to federal investigators. One of the counts stems from Danchenko denying that he spoke with a person dubbed “PR-Executive-1” in the federal indictment. That person is Dolan, his attorney confirmed to The Epoch Times.

Dolan has had a relationship with former President Bill Clinton and former First Lady Hillary Clinton since the 1990s; Dolan campaigned on behalf of the latter in the 2016 presidential election. Hillary Clinton’s campaign helped pay for Steele’s dossier, which targeted then-presidential candidate Donald Trump and has since been shown to be riddled with false information.

The House Intelligence Committee, which was headed by Rep. Devin Nunes (R-Calif.) while Republicans controlled the House following the 2016 general election, sent letters and subpoenas to the FBI and DOJ for all documentation relating to the dossier, including all of the connections that Rosenstein and the FBI had gathered throughout the scandal known as Russiagate, Patel said on his show.

“Charles Dolan never came up once. Me nor not one member of my team, nor any of the Republicans on House Intel, had ever heard of Charles Dolan until John Durham’s indictment,” Patel said, referring to special counsel John Durham, who’s conducting an investigation into the origins of the Trump–Russia probe.

As further evidence of what he described as the FBI and DOJ purposefully withholding information, Patel pointed to how the indictment reveals that agents had interviewed Danchenko on five different occasions. According to DOJ Inspector General Michael Horowitz’s 2019 examination of the dossier and related matters, only three interviews with Danchenko took place.

“They did not admit that to us when we were investigating the Russiagate investigation. I think we added at most two or three instances of an interview and we never got the full contents anyway,” Patel said. “Now, there’s five. Where did that come from?

“Why didn’t the FBI tell us this? Why did Rod Rosenstein withhold these documents and this information, even though Congress sent him subpoenas? They only turned over part of it, and what they did turn over, a lot of it was redacted. And that’s why we’re fighting such an uphill battle to disclose it to the American public, the full story.”

The FBI and DOJ didn’t respond to requests by The Epoch Times for comment by press time. Rosenstein couldn’t be reached by press time.