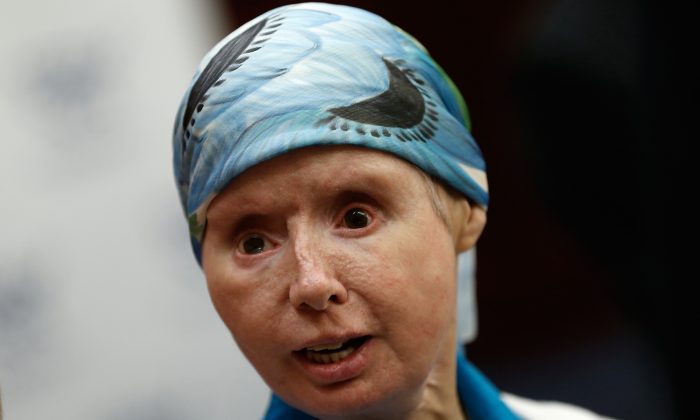 Charla Nash, the victim of a mauling by a pet chimp in Connecticut in 2009 and who underwent a face transplant, speaks at a press conference July 10, 2014 on Capitol Hill in Washington, DC. (Photo by Win McNamee/Getty Images)
US

Charla Nash, the 62-year-old Connecticut woman who nearly got her entire face ripped off from the 2009 attack by a friend’s 200-pound chimpanzee, sat down with Meredith Vieira on the “Today Show” to talk about how her body was rejecting her 2011 facial transplant, after a recent trip to a hospital.

“I had no idea what was going on,” Nash told Vieira. “But then this one biopsy said a slight rejection.”

The discovery came when Nash participated in a study funded by the U.S. Department of Defense, to see whether patients who receive arm, hand, leg, or face transplants can taper off of anti-rejection drugs.

Although her face transplant started rejecting, Nash said she doesn’t have any regrets for taking part of the experiment.

“It would help all the service men and women and other people getting hurt and needing transplants,” she said. “The study is not a failure. They’ve learned so much from all my testing and my input. It’ll help with the future going forward.”

Nash, however, is set to go back to the medication she was on before the study, so her face will be fine.  Doctors say when she does go back, her body should be able to accept the transplanted face again.

During the gruesome attack, when Nash was mauled in February 2009 by her employer’s pet chimpanzee in Stamford, Connecticut, she lost her nose, lips, eyelids and hands.

But five years later, her main concern, she tells Vieira, is riding on horses again: “I don’t want to just sit around. I want to ride.”

She also wants to go back being independent.

“I’ve always been independent,” she said. “So I just wanted to go back to what I had. And as far as help—I have just what I need.”

During the weekdays, Nash has an aide to help with things she needs assistance on, but on the weekends, she is on her own and often goes to her favorite discount store, Savers—using a transportation service for the disabled.